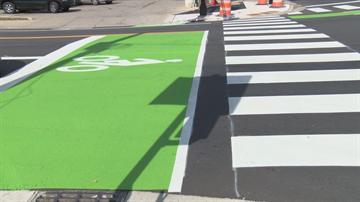 WAUWATOSA -- Marked by bright green paint and \"thermaplastic\" along 16 city blocks, Wauwatosa leaders stand proud of their new, clearly defined bike lanes and boxes up and down North Avenue.

\"We hoped this is what we'd end up with,\" Tosa Alderman Joel Tilleson said Saturday.  \"It's so unique for the area and for the state that we knew we'd have to convince people it wouldn't be a hindrance, but rather a help.\"

Tilleson says Wauwatosa joins Madison and Menomonie as the only  cities in the state with this design. It's part of a $1.5 million North Avenue safety and traffic redesign.  Not the cheapest option, but worth it to Tilleson and other city leaders.

\"We figured East Tosa's destination factor justified the additional expense and the green bike lanes,\" Tilleson said.  \"We believe it's certainly paying off.\"

Tosa will also install signs guiding drivers on rules like stopping before the green box and allowing space for cyclists, especially turning left.

\"It's pretty neat to drive down North Ave. and just see the different colors,\" resident Chris Wiser said. \"The bike lane's very noticeable now, which is I think the whole intention.\"

But not the only intention.

\"We've been working toward this for a really long time,\" East Tosa Alliance Board Chair Maya Romboy said.

Romboy says new businesses, like Bel Air Cantina, specifically chose to come to Tosa because of these planned upgrades.

\"It's made it much easier for pedestrian and bicycle traffic to frequent this  area and it helps free up parking for the people who need to drive to the area,\" Romboy said.

\"We want people, when they cross into Tosa to realize they're in a destination and to stay here and spend their money here,\" Tilleson said.

Tilleson adds the paint lasts anywhere between seven to ten years based on climate.