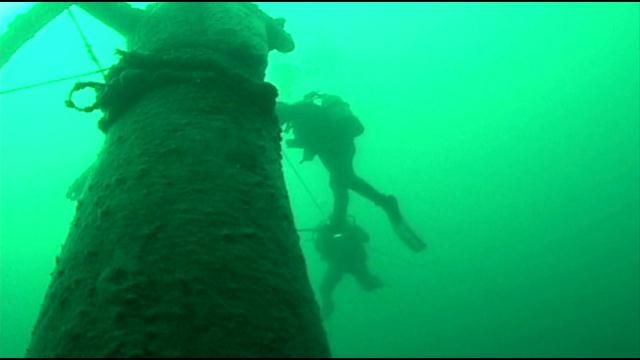 SHEBOYGAN-- As waves crash ashore off the coast of Sheboygan, there's something incredible hidden underneath the waters of Lake Michigan.

CBS-58 obtained underwater video of the Walter B. Allen-- a schooner that sank in 1880.

\"It was found by a Milwaukee diver in about 1975,\" said Steve Radovan, a shipwreck hunter who shot the video.

More than a century later, most of the wreck in still in tact.

\"Unfortunately in the last couple of years the mast has fallen on it,\" said Radovan.

\"If it becomes a NOAA sanctuary, they can protect some of these through their buoy program,\" said Radovan.

There are at least 14 known shipwrecks off the coast in the area, and local officials are fighting to preserve them.

\"It will be a tourism drawl, it will put us on the map as one of 14 Marine sanctuaries that are open in United States,\" said Mayor Mike Vandersteen, of Sheboygan.

Mayor Vandersteen teamed up with other officials from surrounding areas in an effort to turn the area from Port Washington to Manitowoc into a marine sanctuary.

\"This designation would mean a lot to the entire state of Wisconsin,\" said Mayor Justin Nickels, of Manitowoc.

Radovan says it's about keeping the stories behind ships like the Walter B. Allen alive for future generations.

\"The state archaeologist, looks at every single one of them as a time capsule,\" said Radovan.

Because as the sun sets on another day-- you never know what the next dive might bring.

\"There's probably a few more out there,\" said Radovan.

An application with NOAA is still pending.

Right now, the only other marine sanctuary in the Great Lakes Region is in Alpena, MI.  Nickels says that region sees about 100,000 visitors each year.