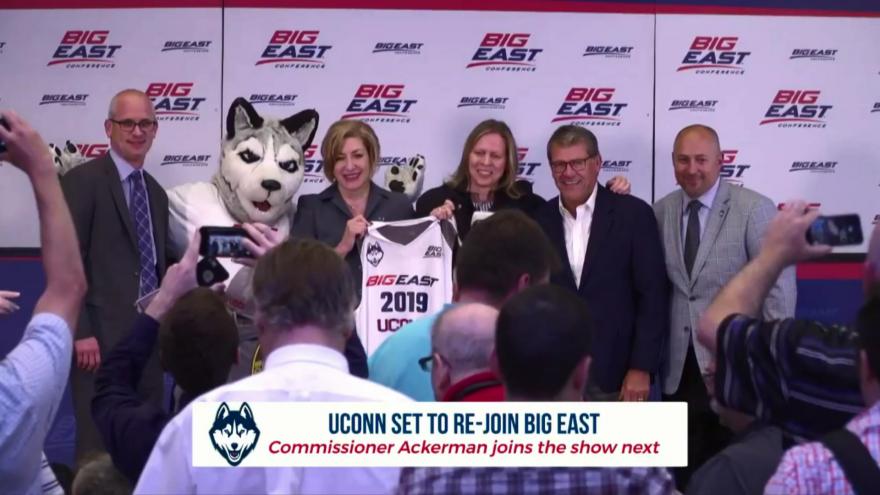 NEW YORK  – The University of Connecticut will re-join the BIG EAST Conference as a full member, with the year of entry to be determined at a later date, the conference announced Thursday.

As one of seven original members of the BIG EAST, Connecticut competed as a BIG EAST school for the first 34 years of the Conference’s existence, beginning in 1979-80 and continuing through the 2012-13.

Connecticut’s membership was authorized by the unanimous vote of all 10 BIG EAST Presidents.

The addition of UConn will increase the number of full members in the BIG EAST to 11 institutions. Connecticut currently competes in the American Athletic Conference.

“On the 40th anniversary of our founding in 1979, we’re very excited to welcome back the University of Connecticut, a BIG EAST charter member,” said BIG EAST Commissioner Val Ackerman. “As a group of schools rooted in basketball pre-eminence, we can think of no better partner than UConn to join us in perpetuating the rivalries, traditions and successes that have made the BIG EAST unlike any other conference in college basketball. We know that our competitions and the experiences of our student-athletes, coaches and supporters across all of our sports will be greatly enriched by UConn’s return.”

“The BIG EAST is an incredibly special and enduring part of our heritage,” said UConn President Susan Herbst. “We were a founding member 40 years ago. Our programs grew and thrived in this conference over decades. The intensity of the competition, the passion of our rivalries, and all of our most triumphant wins and toughest losses helped to make us who we are. Coming back here means UConn is coming home. We are excited about the future.”

The University of Connecticut, whose main campus is based in Storrs, has an enrollment of more than 30,000 students and currently sponsors 24 sports. The Huskies will participate in 20 of the BIG EAST’s 22 sports.

The BIG EAST recently marked the 40th anniversary of its founding, which dates back to May 29, 1979. As one of the Conference’s founding members, UConn enjoyed significant athletics successes over more than three decades of BIG EAST competition, including 80 conference championship titles across all sports.

The Huskies were especially successful in men’s and women’s basketball during their previous run in the BIG EAST. As a member school, the men’s basketball program won 10 regular-season titles and seven BIG EAST Tournament championships, in addition to national titles in 1999, 2004 and 2011. The UConn women’s basketball program has won or shared 19 BIG EAST regular-season titles and captured 18 BIG EAST Tournament crowns, including 16 titles over a 19-year span (1994-2012). The women’s program also earned eight of their 11 national championships as a BIG EAST school.

Connecticut’s field hockey program has remained an associate member of the BIG EAST following the Conference’s membership reconfiguration in 2013. The Huskies have won the league’s field hockey championship in each of the last seven years and have earned 18 overall conference titles as a BIG EAST member, highlighted by three national championships in the last six years. The UConn women’s lacrosse team also participated in the BIG EAST as an associate member through 2017-18.