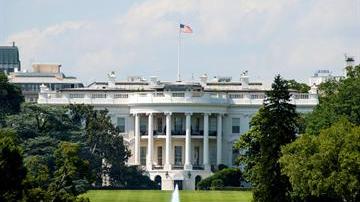 Details continue to emerge about two security incidents at the White House in less than 24 hours.

Secret Service spokesperson Brian Leary told CNN one man was carrying a weapon and made it into the doors of the White House. In the second incident, a man attempted to enter the White House by foot before he was arrested after driving up to a security barrier.

Rep. Mike Rogers, a Michigan Republican and chairman of the House Intelligence Committee, suggested that the Secret Service has lapsed in the testing and audits that would have kept security up to standard.

\"We see this a lot. It happens frequently in other places where there are static security forces, and it's just a matter of the Secret Service upping their game to make sure that they can maintain that every detail matters. A door locked, a quick reaction when somebody hits the fence and over the gate,\" Rogers said on CBS on Sunday morning. \"I think they are going to have to reinstate some of these ongoing checks about what activities they participate in.\"

Congressman: This is 'inexcusable'

Rep. Peter King, R-New York, demanded a full investigation and called for a congressional hearing to ensure that changes are implemented.

\"There can be a lot of conspiracies against a president. A lot of very complex assassination plots. This is the most basic, the most simple type of procedure and how anyone, especially in these days of ISIS, and we're concerned about terrorist attacks, someone could actually get into the White House without being stopped is inexcusable,\" King said on Fox News.

The Obamas were not at home at the time of the incidents. Minutes before a man jumped the fence, President Barack Obama and his daughters left the South Lawn by helicopter. It is not clear where first lady Michelle Obama was, but officials tell CNN that the family was staying at Camp David, Maryland, for the weekend.

In a statement from White House on Saturday night, spokesperson Frank Benenati said the President expressed his support for the Secret Service.

\"The President has full confidence in the Secret Service and is grateful to the men and women who day in and day out protect himself, his family and the White House. The Secret Service is in the process of conducting a thorough review of the event on Friday evening, and we are certain it will be done with the same professionalism and commitment to duty that we and the American people expect from the USSS.\"

The Secret Service released a statement Saturday citing the ever-present security threats to the White House complex. The statement said that after the fence jumper incident, Secret Service Director Julia Pierson had ordered heightened security around the White House and the Pennsylvania Avenue fence line where tourists and protesters often gather.

Earlier in the month, a man wearing a Pokémon hat jumped the White House fence but was quickly stopped by the Secret Service. On Friday, something very different happened.

Omar Gonzalez, 42, was able to jump the north fence and sprint to the White House doors before he was stopped.

The Secret Service said the location of Gonzalez's arrest is not acceptable and that it is investigating interviewing personnel and reviewing policies and security procedures.

Gonzalez is accused of unlawfully entering a restricted building or grounds while carrying a deadly or dangerous weapon, officials said.

The knife he carried in his pants pocket was a Spyderco VG-10 folding knife with a 3-and-a-half inch serrated blade, according to an affidavit. On Friday, the Secret Service had said the fence jumper appeared to be unarmed.

Gonzalez told a Secret Service agent \"that he was concerned that the atmosphere was collapsing and needed to get the information to the President of the United States so that he could get the word out to the people,\" the affidavit read.

He was an Iraq war veteran who retired on disability.

A Secret Service officer said he yelled at the intruder to stop. According to the affidavit, Gonzalez was apprehended just after making it inside the doors.

Gonzalez, who was in custody Saturday evening, is scheduled to appear before a U.S. magistrate on Monday. The charge is punishable by up to 10 years in prison.

CNN White House producer Becky Brittain said she has never been evacuated off White House grounds in her nine years of reporting there.

The man behind the wheel of the vehicle that did not stop was identified as Kevin Carr of Shamong, New Jersey. He was arrested and charged with unlawful entry, Leary told CNN. Carr was born in 1995, making him around 19.

According to Leary, the incident happened at the entrance at 15th and E streets, where the driver did not stop when the Secret Service ordered him to do so.

The man's car did not hit the barriers at the entrance, and he then exited the vehicle. Carr was arrested after he refused to leave, Leary said.