Two injured in single car crash near 30th and National 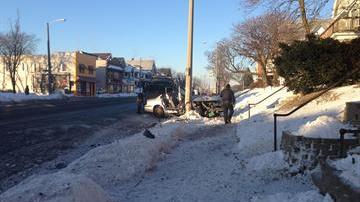 MILWAUKEE -- Two people were injured in a single car crash near 30th and National Thursday morning.

Police say the vehicle was speeding on National Ave. when it lost control and hit a light pole. Both the driver and passenger were transported to a local hospital from the scene of the accident.

It's unclear when the crash occured, but the mangled car was seen resting against a pole and facing homes on National Avenue just before 8:30 a.m. Police cleared the scene just before 9 a.m.

The 21-year-old male driver is in grave condition, and the 19-year-old passenger is in good condition.

Stay tuned to CBS 58 News for the latest updates.