Trump press conference after no deal with Kim Jong Un: "Sometimes you have to walk" 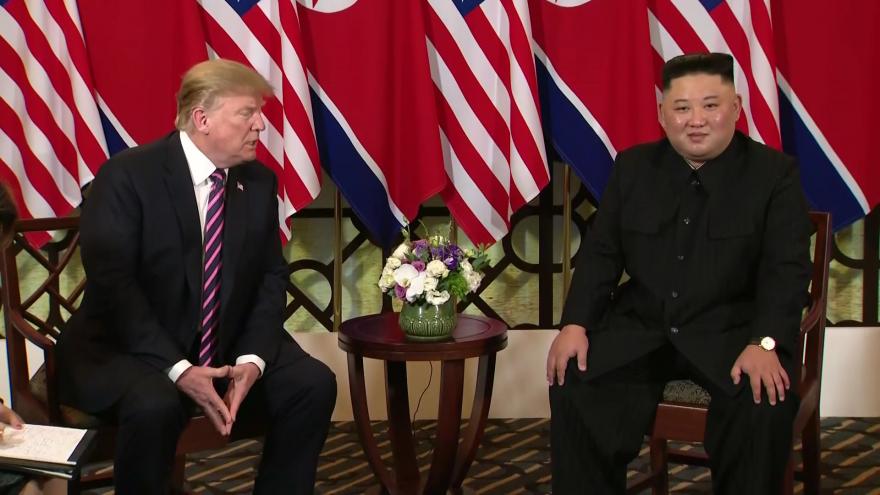 (CBSNews) -- President Trump told reporters in Hanoi he and North Korean leader Kim Jong Un did not sign an agreement as scheduled largely because they disagreed on sanctions and nuclear facilities.

Mr. Trump, fielding reporters' questions after the White House abruptly announced the summit would be cut short, explained, "Sometimes you have to walk." Mr. Trump said he and U.S. leaders decided walking away would be better than giving away too much.

North Korea, the president explained, wanted the U.S. to eliminate all sanctions imposed on it, in exchange for the shuttering of just one nuclear facility.

The summit was truncated, to the surprise of the press, with the elimination of a lunch and a signing ceremony previously on the schedule. Both Mr. Trump and Kim had expressed cautious optimism in earlier interactions with the press. Mr. Trump described the conversations as "productive." When asked earlier if he was willing to denuclearize, Kim said, through a translator, "If I'm not willing to do that I wouldn't be here right now."

White House press secretary Sarah Sanders says talks will continue, but there is no third summit scheduled at this point.

In a translated statement from South Korea's Blue House, a spokesperson for President Moon Jae-in said it was "regrettable" Mr. Trump and Chairman Kim were unable to reach a deal at the summit.

"It seems clear that they have made more meaningful progress than at any time prior," the statement added.

President Moon added that South Korea hopes that the United States and North Korea "will continue to have active dialogues on various levels going forward on the basis of the discussion results from this summit. The Korean Government will do all it can to ensure that the United States and North Korea can maintain momentum for dialogue while continuing their close communication and cooperation."

As of 3:08 p.m. local time and 3:08 a.m. Eastern time, the president's motorcade departed the hotel where the press conference was held for the airport in Hanoi.

No next summit scheduled at this point, Trump says

Mr. Trump said there is no next summit scheduled with Kim at this point.

A reporter asked Mr. Trump if he has brought up Otto Warmbier, the American who died after being in the custody of North Koreans.

"He tells me he didn't know about it and I will take him at his word," the president said.

Warmbier's family was invited as the president's guests at last year's State of the Union address when Mr. Trump was still talking tough about North Korea and Kim.

Mr. Trump asked if he would bring back joint military exercises with South Korea, said those exercises are exceedingly expensive. The U.S., he said, is saving lots of money.

Mr. Trump then appeared to criticize South Korea for not paying more for those military exercises.

Mr. Trump said he will be calling South Korean President Moon Jae-In and Japanese Prime Minister Shinzo Abe as soon as he can get near a phone.

Pompeo: We are closer to goals with North Korea than 36 hours ago

Mr. Trump invited Secretary of State Mike Pompeo to the podium, where Pompeo said he believes they are closer -- he didn't say closer to what -- now than 36 hours ago.

Mr. Trump, asked about a hearing hours earlier with his former attorney Michael Cohen, blasted Democrats for holding the hearing during his summit with Kim on the other side of the world.

"I think having a fake hearing like that and having it in the middle of this very important summit is really a terrible thing," Mr. Trump said.

The president claimed Cohen "lied a lot" but the hearing was very interesting.