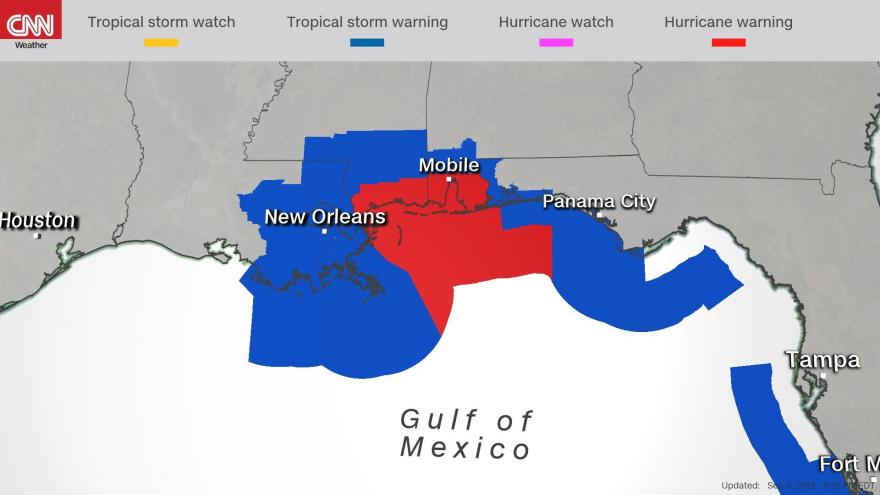 (CBSNews) -- Tropical Storm Gordon moved quickly Monday across the eastern Gulf of Mexico as the wind strength increased to 60 mph, the National Hurricane Center (NHC) said. It's expected to make landfall as a hurricane on Tuesday, the NHC said.

As of 11 p.m. Monday, Gordon was located about 330 miles east-southeast of the mouth of the Mississippi River and moving west-northwest at 17 mph.

A hurricane warning is in effect from the mouth of the Pearl River along the Mississippi-Louisiana border to the Alabama-Florida border, meaning hurricane conditions are expected. The storm is expected to make landfall Tuesday evening.

Heavy rainfall from Gordon will affect southern Alabama, southern Mississippi and southern Louisiana, with totals that could reach as high as 8 inches in some areas. Flash flooding is also possible.

The National Hurricane Center has discontinued the tropical storm warning for the southwest coast of Florida, as of their 8:00 p.m. ET update. The following warnings, however, are still in effect:

New Orleans Mayor LaToya Cantrell issued a state of emergency for the city and said all city offices would be closed Tuesday.

The Mississippi Emergency Management Agency warned Gordon could make landfall as a Category 1 hurricane late Tuesday, WWL-TV reports.. Authorities told residents to set up a number of locations where folks can pick up sandbags.

"You got a concern whenever there is a hurricane in the gulf," Battalion Chief Anthony Trosclair said.

The Biloxi Fire Department will be keeping a careful eye on low lying areas. Trosclair told WWL-TV crews are preparing to make swift water rescues in addition to other emergencies.

The storm threat comes amid major flooding in the Midwest, due to a slow-moving storm that has brought flash flood watches and warnings from Kansas to Nebraska, stretching to portions of Iowa and northern Illinois.

Meanwhile, Tropical Storm Florence continued to gain strength over the eastern Atlantic on Monday, about 980 miles west of the Cabo Verde Islands.

Florence was moving toward the west-northwest near 16 mph and maximum sustained winds of 65 mph. There are currently no coastal watches or warnings in effect.