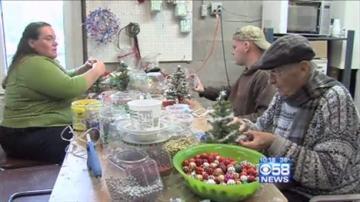 WHITEFISH BAY- It might seem early to start decorating the Christmas Tree, but not if you expect that tree to arrive on time to our military men and women serving overseas

Tucked away in a workroom at Winkie's in Whitefish Bay Wednesday, \"Trees from Home\" volunteers were on the home stretch of putting together care packages for the holidays.

\"It was 2003 I was feeling sorry for myself,\" said Stuhlmacher about her son John who was stationed in Iraq. \"I thought how can I make Christmas  better for him. I wasn't very crafty.\"

She described the tree she mailed to him as god awful ugly, but John, now back home, said it helped him and his unit forget the world outside. It was prominently displayed in the cramped quarters he shared with fellow members of the Army National Guard.

When John was done, he convinced his mom to keep the trees going and now they deliver an estimated 10,000 to military members around the world.

\"It's about not being home,\" said Julie, \"and getting the love a mother who actually isn't your mother.\"