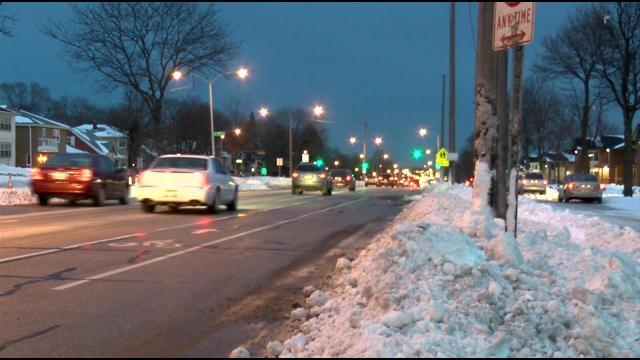 As cars pass by on North 73rd Street and Silver Spring Drive in Milwaukee, neighbors, like Zee Purifoy say it's not unusual to see drivers clocking in speeds 15-miles above the limit.

\"I think sometimes the drivers can drive too fast,\" said Purifoy.

A somber reminder for drivers to slow down came Monday afternoon.

\"It's so sad because you have people who want to help people,\" said Purifoy, \"and stuff like that happens, so people become afraid to help.\"

A county transportation supervisor was struck by an oncoming car around 12 PM Monday.

\"You have to be careful, lives are at stake,\" said Chris Abele, Milwaukee County Executive.

The worker was trying to help an elderly woman get her car out of a snow bank on eastbound Silver Spring Drive.

\"The worker had the lights on, on this truck, he had a florescent vest, and when you see those lights on, if you haven't slowed down already you've got to slow down,\" emphasized Abele.

\"Our crews are professionals, they've been in environments like this, but anything can happen,\" said Brian Dranzick, Director of the Department of Transportation.

Milwaukee Police cited the driver who hit the worker.  Neighbors say it's not the first time they've seen an accident like this happen on their street, and they want all drivers to do their part in preventing crashes.

The worker's name has not been released.