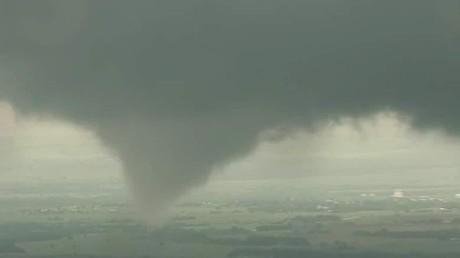 Severe storms roared through the Midwest, unleashing tornadoes, rain and golfball-size hail, and shutting down the main airport in Oklahoma City.

The Oklahoma City area appeared to be the hardest hit, with as much as eight inches of rain reported within hours, according to the National Weather Service.

At least 13 people were injured when a tornado hit a mobile home park, said Susie Patterson of the Emergency Medical Services Authority in Oklahoma City

Low visibility made it difficult to reach some affected areas, Timmons said.

The National Weather Service declared a flash flood emergency -- the first in Oklahoma City's history. The city's main airport canceled all flights for the rest of the night Wednesday and evacuated passengers and employees to a pedestrian tunnel.

\"There will be no more flights tonight at WRWA,\" the Will Rogers World Airport tweeted.

The storms are part of a larger system going through Kansas, Oklahoma and Texas, CNN meteorologist Jennifer Gray said.

The Norman Regional Hospital in Oklahoma City had some minor damage and is on generator power but is fully operational, health officials said.

In Bridge Creek, Oklahoma, about 30 miles southwest of Oklahoma City, forecasters warned residents to take cover as the Weather Service issued a tornado emergency and said a large, destructive twister was in the area.

Jeff Theis, who shot video of a dark funnel cloud near Hardy, Nebraska, said he saw a tornado destroy a farm in the community. Hardy is near the state line with Kansas.

Weather spotters reported seeing tornadoes northeast of the town of Lincoln, according to the National Weather Service.

Severe storms were expected to give way to showers by Thursday morning.

Areas affected included Republic and Scandia, where there were multiple reports of damage to buildings.