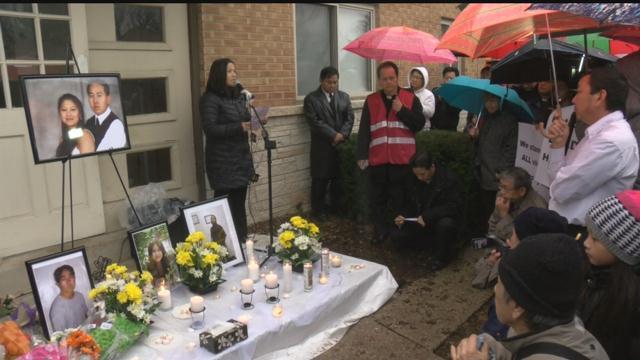 Family member and Milwaukee activists on Sunday called for love in the face of hate following the shooting deaths of three people. Some groups say they believe the act was motivated by race.

According to a criminal complaint, the suspect asked about the race of one of the victims immediately before the shooting on March 6.

Members of the Hmong and Latino communities widely attended a vigil with that message in the afternoon. Organizers scheduled the vigil to fall exactly one week after the shooting at the apartment building on the 3300 block of South 92nd Street.

Candles flickered in the rain as people listened to the families of victims. The victims have been identified as Jesus Manso-Perez and wife and husband Phia and Maikao Vue.

All dying from injuries caused by gunshot wounds to the head, according to a criminal complain.

"I think their spirit do not want to go. They make rain. It's tears. It's cry. So tonight, very sad. And we want to honor and remember our family and our loved ones," Douglas Vue said.

According to a criminal complaint, 39-year-old Dan Popp - a white man - asked about Perez's heritage before telling him "You guys got to go".

Popp later forced his way into the apartment belonging to the Vues and their four children and killed Phia followed by Maikao, according to the criminal complaint.

"We all know the circumstances surrounding these murders. The individual who has been charged with the murders did so primarily, it appears, because of the backgrounds of the victims. We cannot allow that to happen as a community," Milwaukee Mayor Tom Barrett said.

The Hmong American Friendship Association and the League of Latin American Citizens are calling for renewed awareness on tolerance and cultural respect. The groups are also spreading the word about online fundraising for expenses for the Vue family - including this one.

"This hour, exactly same time, same Sunday. And we hope their spirits will rest in peace. And their names will be remembered," Vue said.

Funerals plans will be set in the next few days.