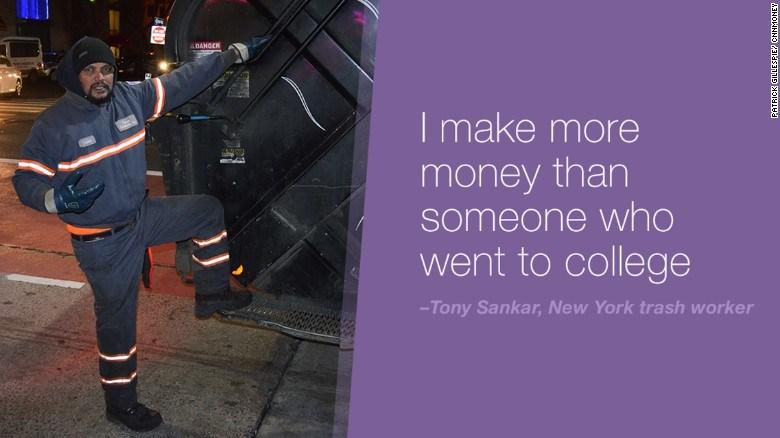 (CNN MONEY) When Noel Molina smells trash, he smells money. Lots of it.

Molina and his co-worker, Tony Sankar, have been picking trash together for a decade in New York City.

They've seen, and smelled, it all. Stale fish, footlong rats, dead pigs and cows. Countless drunks have heckled them. And yes, one time Sankar saw a human leg in a dumpster.

And yet, they love their job. Part of the reason is they get paid well for their hard work.

Molina made $112,000 last year as a garbage truck driver and Sankar made $100,000 as a helper, riding on the back of the truck. Their wages have grown in eight of the last nine years, according to their bosses, brothers David and Jerry Antonacci, owners of Crown Container, a waste management company.

Molina dropped out of high school in the 10th grade and he's worked at Crown for 10 years. He says his starting salary was about $80,000. Sankar too dropped out of school before migrating to the U.S. from Guyana 20 years ago.

Not everyone makes six figures, but most trash workers are doing better than high school dropouts and even graduates.

Molina and Sankar are aware that they outearn many people with a college degree.

Guys who go to college might not make the kind of money "(I make) on the back of a garbage truck, picking up trash," says Sankar.

Not only do they earn a good salary, their wages are growing faster than the average too. Nationwide, wages for trash workers have grown 18%, which is a lot faster than the 14% average for all workers since the recession ended in June 2009.

That's because it's not easy to find workers in the business. Employers can't find qualified truck drivers, landfill operators or mechanics.

David Antonacci says he got 50 applications when he advertised for a truck driver's job. Only four applicants had a commercial drivers license and all four had penalties on their licenses. So Antonacci couldn't hire any of them.

That lack of available talent is one key reason why Antonacci and others in the industry have given out raises at a faster pace than the national average.

It's the same story in other parts of the country. Kathy Morris runs a waste management facility in Davenport, Iowa, and she's raised wages to retain employees.

"Not only has the demand for workers increased but (so have) the types of skills," says Morris, director of the Waste Commission of Scott County. The landfill operators at her site make about $50,000 a year.

It's far from an easy job. Beyond the stench, Molina and Sankar lift heavy trash bags every night, weave through traffic, and talk to each other constantly for safety. They work a lot too -- 55 to 60 hours a week.

Outside of physically grueling work, negative stigmas deter young adults from applying even though the barrier for entry isn't high: private trash companies don't require a high school diploma. Truck drivers need a commercial drivers license, which some employers will train employees for.

Biderman argues the waste industry offers long-term job security for working class folks. Both Molina and Sankar have full health care coverage and a 401(k) retirement account. If they leave the job, they are entitled to severance pay too.

"We're one of the very few blue collar jobs that can't be outsourced to China," he says.

There are also new opportunities in trash. New types of recycling have created more jobs. At Morris' site in Iowa, she has a crew that only separate recycling for wood, roof shingles, kitchen appliances and electronics.

Morris has 45 employees now, up from 35 in 2009. Morris plans to hire six more people this year to handle a new recycling system.

Nationally, there are 50,000 more trash workers today than there were in 2010, according to Labor Department data.

Given the shortage of workers, some of them can hope to earn the six-figure salaries of Molina and Sankar, who are members of a labor union that helps negotiate higher salaries.

Molina is buying his first house, a 4-bedroom in Freeport, New York. Divorced with three kids, Molina wants them to have a place outside the city.

Sankar, 48, supports eight of his nine kids -- the oldest is an adult.

On a cold February night, Sankar and Molina were on their route when a young man asked Sankar if Crown was hiring. Sankar gave the young man the company's address and said to call. When told how much Sankar makes, the young man was in disbelief:

"No, I wouldn't believe that."

Sankar picked up the last bag at the site, chucked it into the back, jumped onto the truck and smiled.

"It's a good paying job," said Sankar, laughing into the winter night.