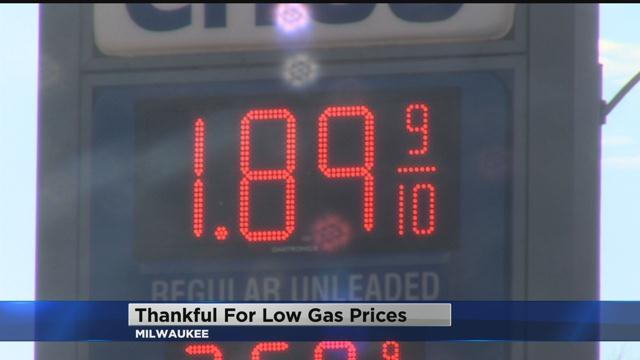 46.9 million Americans are expected to travel 50 miles or more from home during the Thanksgiving holiday. Nearly 90 percent of those people will drive to their holiday destination, according to AAA.

Drivers can be thankful this year for the lowest gas prices since 2008. That’s the year Barack Obama was elected President, the year Beijing had the Summer Olympics, and the year of the global financial crisis.

The average price for a gallon of gas in the Milwaukee-Waukesha area is $1.91 on this Thanksgiving morning. That's according to the AAA daily fuel gauge report. A year ago on Thanksgiving, the average price in the metro area was 87 cents higher at $2.78.

About half of all gas stations across the United States are now selling gas for two dollars a gallon or below, according to Nick Jarmusz, Director of Public Affairs for AAA Wisconsin.

“So whether you’re gassing up here in Milwaukee before you leave or anywhere else in the country, you’ll probably see two dollars or below. Maybe if you stop in the Chicago metro area you might see prices a little higher, but pretty much anywhere else it will be the same story,” Jarmusz explained.