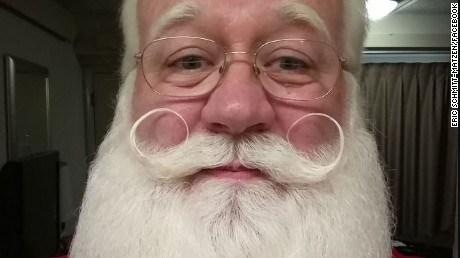 (CNN) -- Knoxville News-Sentinel columnist Sam Venable knew he'd found a sad story, but he didn't know just how many hearts it would break.

Venable's column about a terminally ill 5-year-old boy dying in Santa's arms has spread everywhere since its Saturday publication in the Tennessee newspaper. Among other things, it nails the emotional richness of the holiday season.

"I've gotten a big response to this," Venable told CNN. "People have told me that they were crying when they read it, and I tell them that I was crying when I wrote it."

It all started several weeks ago when Eric Schmitt-Matzen, the Santa in Venable's column, got a call after work.

"It was a nurse I know at the hospital," Schmitt-Matzen told the News-Sentinel. "She said there was a very sick 5-year-old boy who wanted to see Santa Claus."

Schmitt-Matzen, whose 300-pound frame and real white beard make him a popular Santa in the Knoxville area, got to the hospital in 15 minutes and requested that anyone leave the room if they were about to cry.

In his column, Venable relayed Schmitt-Matzen's brief interaction with the boy:

"When you get there, you tell 'em you're Santa's Number One elf, and I know they'll let you in."

"He kinda sat up and gave me a big hug and asked one more question: 'Santa, can you help me?'"

"I wrapped my arms around him. Before I could say anything, he died right there. I let him stay, just kept hugging and holding on to him."

After the boy's family realized that he had died, Schmitt-Matzen said he left the hospital and cried all the way home.

"I was a basket case for three days. It took me a week or two to stop thinking about it all the time," he told the News-Sentinel. "Actually, I thought I might crack up and never be able to play the part again."

Schmitt-Matzen considered hanging up his red suit but saw some children laughing and playing and then changed his mind.

"It made me realize the role I have to play," said the part-time Santa, whose Facebook page has been flooded with likes. "For them and for me."

His is not your traditional feel-good Christmas story. Still, we're certainly glad it was told.