Tearful parents of James Foley speak out about his execution 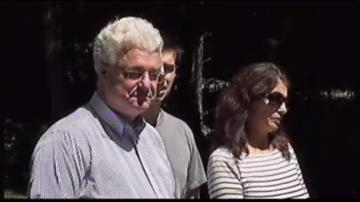 MILWAUKEE -- As the Marquette University community mourns the killing of graduate James Foley, his parents spoke out for the first time Wednesday since his execution.

Their statements just outside their New Hampshire home came shortly after the U.S. Government confirmed it was Foley seen in online video being decapitated by a masked man with a British accent.

\"I just hope that as a country we can come together and have peace on earth,\" mother Diane Foley said while fighting back tears.

Since their son's abduction in Syria back in 2012 the Foley family, a people of strong faith, had prayed and hoped he would return.

They spoke of the last time they were all together and how his mother asked him not go go back.

\"It was just his passion in life,' Foley's father John lamented. \"It's what he wanted to do.\"

It is their pride in their son that helps them through the grief.

The Foleys recalled a committed human being who wanted the world to understand the nature and cost of conflict.

They say that endeavor must not die with their son. And they asked for mercy for the other hostage seen in the video.

Diane says she knows the killers knew that her son and other journalists are innocents.

\"They knew that Jim was just a symbol for our country,\" Diane Foley added. \"It's that hatred that Jim was against.\"