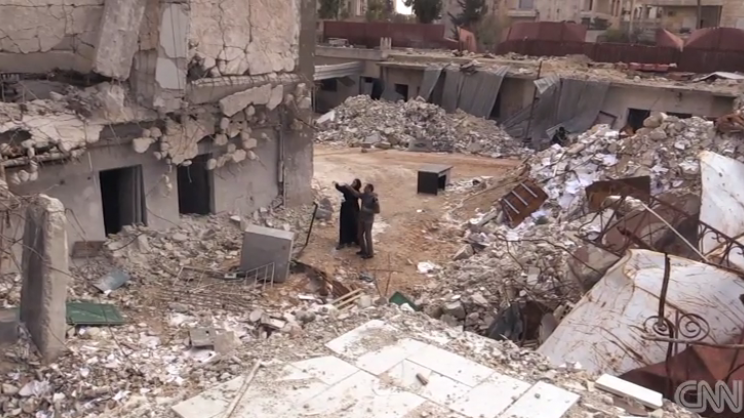 (CNN)The Syrian regime has pounded the besieged city of Daraya with barrel bombs, just hours after food aid was delivered to the area for the first time in almost four years, officials and monitors said.

The London-based Syrian Observatory for Human Rights said that at least 68 barrel bombs had been dropped on Daraya on Friday as agencies delivered food rations to the city on the brink of starvation.

This comes as the United States is leading airstrikes targeting ISIS extremists, but the regime is bombing cities and towns trying to break away from government control, including the very groups armed by the United States to fight ISIS.

The bombardment and fresh twin suicide attacks on Saturday are chilling reminders of the lack of progress in the Syria conflict, which has raged now for almost five years causing hundreds of thousands of deaths, the destruction of towns and mass displacements.

The Saturday blasts rocked the suburban Damascus area of the Sayeda Zeinab Mosque, the main Shia center of worship in Damascus, killing at least nine people, according to the Syrian Observatory for Human Rights. The first was carried out by a man wearing a suicide vest, and the second by a car rigged with explosives, the monitor said.

After mounting international pressure, Syrian President Bashar al-Assad's regime finally eased restrictions on aid deliveries to beseiged areas, including Daraya, which has essentially been cut off from normal food and water supplies since 2012 as the government tries to regain control of the opposition stronghold.

"Obviously, such attacks are unacceptable in any circumstance; but in this case, they also hamper the delivery and distribution of badly needed assistance," U.S. State Department deputy spokesperson Mark Toner said in a press briefing Friday.

"It shouldn't be a situation where the Syrian government, for example, decides which areas receive humanitarian assistance," he added.

The U.N.'s World Food Program said it had delivered enough family rations of rice, lentils, chickpeas, beans, bulgur, oil, salt and sugar to feed 2,400 people for a month in Daraya. It also delivered flour in bags to feed the population of 4,000 people for a month. Other figures used by the council, however, show the population to be closer to 8,000.

The nine-truck convoy also delivered medical supplies and health items late Thursday to the city, and had left by early Friday morning.

The Syrian branch of the U.N.'s Office for the Coordination of Humanitarian Affairs called for the regime to end the siege in a tweet.

A report from a handful of humanitarian agencies last year concluded that the world is failing the people of Syria.

This year a partial truce was reached, paving the way for the delivery of some aid into parts of the country that desperately needed it.

The opposition's chief negotiator, Mohammad Alloush, resigned this month the failure of the peace talks, saying the international community had failed to stop the Assad regime's atrocities.