Suspects Steal Credit Cards from Car in Grafton and Spend Over $4,000 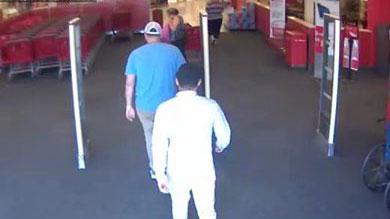 Ozaukee County Sheriff is looking for two suspects that stole four credit cards out of a car in Grafton and used them to purchase $4,387.93 worth of goods.

On June 18 at 12:17 PM,  2 white male suspects entered the Target located at 1250 N Port Washington Rd in Grafton with 4 stolen credit cards taken from an unlocked vehicle in the Town of Grafton and purchased $2,000.00 worth of items.

According to Ozaukee County Sheriff, these two individuals proceeded to a Target in Menomonee Falls then to one in West Milwaukee with charges totaling $4,387.93 between all three stores.

Ozaukee County Sheriff is asking if anyone recognizes these two people, or if anyone saw anything suspicious at Edgewater Golf Course on the morning of Saturday, June 18, when the suspects entered the unlocked vehicle and stole 4 credit cards to make these purchases.