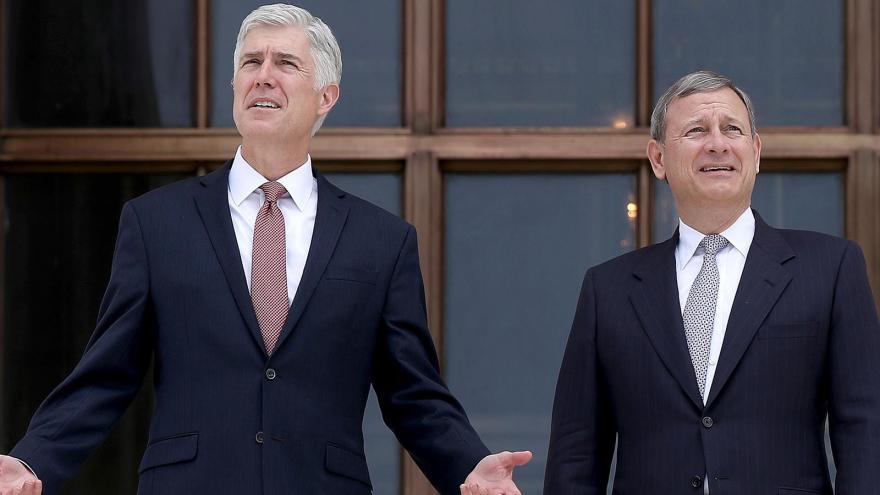 Supreme Court Justice Neil Gorsuch (L) talks with Chief Justice John Roberts. For seven long months, the Supreme Court mulled a case concerning non-unanimous jury verdicts in state courts, but when the justices finally issued a fractured and fiery set of opinions on Monday, the outcome said as much about the current temperature of the court as it did about the final disposition of the case.

(CNN) -- For seven long months, the Supreme Court mulled a case concerning non-unanimous jury verdicts in state courts, but when the justices finally issued a fractured and fiery set of opinions on Monday, the outcome said as much about the current temperature of the court as it did about the final disposition of the case.

Ostensibly, the case centered on Louisiana and Oregon, which allowed non-unanimous jury verdicts for serious criminal offenses. The court said unanimous verdicts were required and invalidated prior precedent. (Louisiana has already changed its law.)

But among the various opinions was a dispute about when the court should overturn precedent, an issue the justices have grappled with in recent years and could come into play this spring in a blockbuster abortion case out of Louisiana as well as in cases this term and next dealing with religious liberty.

For Justice Neil Gorsuch, writing for the majority on Monday, the result was clear cut. Over 26 pages, he dug into the intent of the founders. "Whether it's the common law, state practices in the founding era, or opinions and treatises written soon afterward -- the answer is unmistakable," he wrote.

In doing so, he targeted a 1972 case called Apodaca v. Oregon, where the court held that the Sixth Amendment permits non-unanimous verdicts in state criminal trials, calling it an "admittedly mistaken decision."

The ruling, Gorsuch wrote, was an "outlier on the day it was decided, one that's become lonelier with time."

In general, the court does not like to overturn its prior cases. It's a legal doctrine referred to as "stare decisis," which is roughly translated to mean "stand by the thing decided and not disturb the calm." It reflects the court's respect for the accumulated opinions that have been handed down in history as well as the consistent development of legal principles.

The Latin maxim often comes up in confirmation hearings as nominees are grilled on whether they would uphold past cases on issues such as abortion, for example. Liberal interest groups are fearful that the newly solidified conservative majority in the coming years might overturn precedents on major issues.

In a case pitting a property owner against the government, Justice Elena Kagan charged that the court's 5-4 majority "smashes hundred-plus years of legal rulings to smithereens."

And Justice Stephen Breyer wrote the dissent when the majority overturned precedent in a case concerning whether a state can be sued by a private party in the court of another state without consent.

"Today's decision can only cause one to wonder which cases the court will overrule next," Breyer said at the time, name-checking a 1992 opinion that reaffirmed the Roe v. Wade ruling legalizing abortion.

Another notable case came in 2018 when the court dealt a major blow to public sector unions, rolling back a 1977 ruling.

For his part, Kavanaugh, a conservative, used the opportunity to write a concurring opinion that reads forward-looking and seemingly sets a marker for future cases. Whether he would vote to overturn precedent, especially on abortion rights, was a major issue during his 2018 confirmation hearings.

Over 18 pages on Monday, Kavanaugh said that if an opinion is "egregiously wrong" with "significant negative consequences" and overruling it would not "unduly upset reliance interests," it should be overturned.

Such an opinion might trigger alarm in Kavanaugh's critics who fear he may set his sights elsewhere.

"Everyone knows Kavanaugh will overturn or gut precedent when it comes to abortion, and if anything, his concurrence only reinforces our concern," said Christopher Kang, chief counsel of Demand Justice, a group opposed to President Donald Trump's judicial nominees.

Sotomayor, a liberal justice, sided with the majority, however, and said overturning precedent in the case was "not only warranted, but compelled." She emphasized that stare decisis has been a "fundamental part of our jurisprudence since the founding" but that Apodaca had always been on "shaky ground" because it represented a "universe of one" that was "irreconcilable with strands of constitutional precedent."

"The constitutional protection here ranks among the most essential: the right to put the State to its burden, in a jury trial that comports with the Sixth Amendment, before facing criminal punishment," she added.

Alito, who has sided with the conservative majority to overturn precedent in recent years, questioned the court's motive in the case at hand.

In particular, he noted that the two states had relied upon it for 48 years and overturning it would produce a "crushing burden on the courts and criminal justice systems in those states."

Kagan did not write separately -- signing on to most of Alito's opinion -- although she had spoken about the importance of stare decisis during oral argument.

In different part of the opinion, Alito had some strong words for Gorsuch's majority on another subject.

Gorsuch said that the origins of the laws in Louisiana and Oregon were rooted in racism.

"Louisiana first endorsed non-unanimous verdicts for serious crimes at a constitutional convention in 1898," Gorsuch wrote, and he quoted from a committee chairman who said that the avowed purpose of that convention was to "establish the supremacy of the white race."

He said that Oregon's rule permitting non-unanimous verdicts "can be similarly traced to the rise of the Ku Klux Klan."

"Courts in both Louisiana and Oregon have frankly acknowledged that race was a motivating factor," Gorsuch wrote.

But Alito charged Gorsuch and the majority of succumbing to "rhetoric" that, he said, was all too prevalent in current "public discourse."

"Too much public discourse today is sullied by ad hominem rhetoric, that is, attempts to discredit an argument not by proving that it is unsound but by attacking the character or motives of the argument's proponents," Alito said.

"The majority regrettably succumbs to this trend," Alito said.

He stressed that Gorsuch was too quick to point to racism as the root of the choice by Oregon and Louisiana to allow non-unanimous convictions.

"The court tars Louisiana and Oregon with the charge of racism for permitting non-unanimous verdicts," Alito wrote, "even though there are entirely legitimate arguments for allowing them."

The court has issued few opinions so far this term, although some that are expected to divide the justices along ideological lines are still coming, but Alito's strong words suggested frayed tensions.

The court has tried to stay as far as possible from the fireworks dominating the other branches of government and prides itself for leaving its disputes on the printed page. But Alito's words were harsh -- echoing a recent bitter opinion issued earlier in the month on voting rights in Wisconsin.

After the court blocked an extension of absentee ballot deadlines, Ginsburg skewered the majority, and hinted that while civility is important there were deep divisions brewing behind the scenes.

"While I do not doubt the good faith of my colleagues," Ginsburg wrote, "the court's order will result in massive disenfranchisement."

Monday's opinion, a fractured decision featuring odd bedfellows, resolved the case at hand. But it also laid the groundwork for how the court might consider and deliberate over other significant cases coming down the pike.