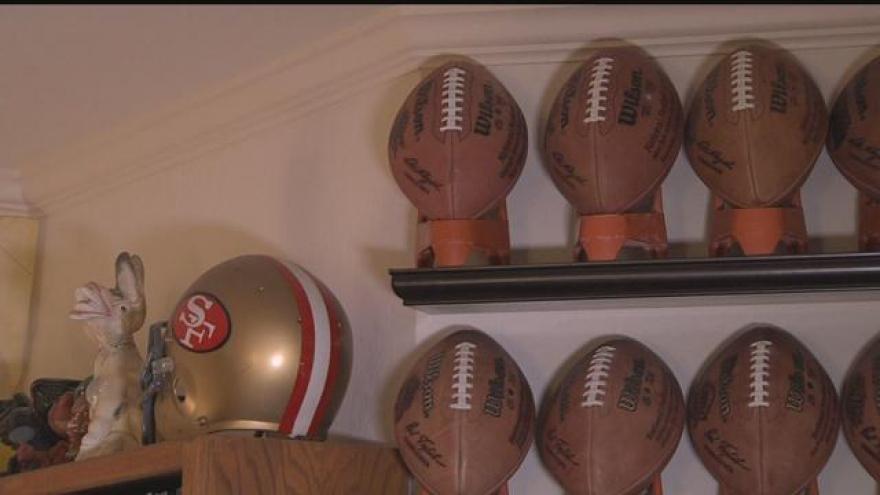 50 years of super bowls, 50 years of iconic moments and memories. Larry Jacobson has seen every single one of them in person.

Inside Jacobson’s mind and in the study of his San Francisco home, reminders of each chapter of the greatest annual spectacle in sports history. The souvenirs tell a long and rich story and include replica footballs from Super Bowls past and patches piecing together five decades of memories.

"San Francisco's one of those places that has not only a nightlife, but it has museums, it has the NFL experience, which I go to every year because I enjoy it. This year, I'll be taking my grandchildren," says Larry Jacobson.

Jacobson has been a lifelong fan of the San Francisco giants and 49ers.

Tickets for the first championship game topped out at $12. Seats for Sunday's game have gone for as much as $12 thousand. But you won't see Jacobson in the VIP section every year.

Jacobson got his super bowl three tickets from a friend, and walked up to the stadium on game day to buy seats for super bowl IV.

But it wasn't until a quarter century later that Jacobson and four other men formed the most exclusive of clubs.  One member of the club, Brown Deer native Bob Cook, passed away just days after the Packers won Super Bowl XLV in Dallas.  The three surviving members of the every super bowl club are still going strong.

Jacobson has even been to every Olympic Games since 1968, and each of the last 52 Rose Bowl Games.

The ironman sorts fan has no intention of ending his Super Bowl streak anytime soon.