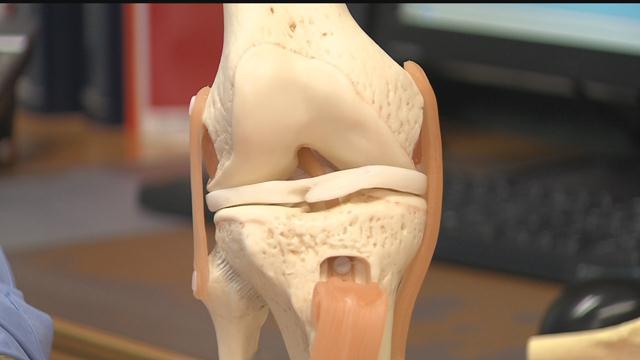 "I started at really young age," she said.

Hard work earned the senior a starting spot on the varsity volleyball team, but it was strength she had to dig for during a basketball game in February 2013.

"I was going up for a rebound and then I came down and a girl from the other team kinda knocked into my knee and I heard a popping noise and then I fell down," she said.

An MRI revealed she tore her ACL and meniscus. She was 15 years old.

Niki is not alone.

A new study presented at the 2015 American Academy of Pediatrics National Conference in Washington, D.C., shows ACL tears in patients 6 to 18 years old increased by 2.3 percent each year over 20 years.

The injury happens more in young girls than boys, with peak rates of ACL tears at age 16. It's 17 years old for boys.

Orthopedic Dr. Brian McCarty is not surprised by those numbers.

He said youth sports is growing, so preventing an ACL injury starts with building muscle strength and training.

"Girls landing, the angle that they land at, they tend to land with their knees straighter than boys do," said Dr. McCarty. "We think that's one of the reason's why they have more ACL injuries."

Dr. McCarty is responsible for reconstructing Niki's ACL. Six months after surgery, she stepped back on the court, just in time for her junior season at Arrowhead High School.

"You never know what could happen," she said. "And even if it does happen to you, you'll be strong enough, you can get through it."

Dr. McCarty said there are injury prevention programs in schools across the city to help young athletes build muscle and withstand intense competition. He said knee swelling is one indication for parents that something is wrong with their child.

In the meantime, Niki and her teammates are competing to get to state. Arrowhead High has a big sectionals match-up with Homestead High School Thursday night.