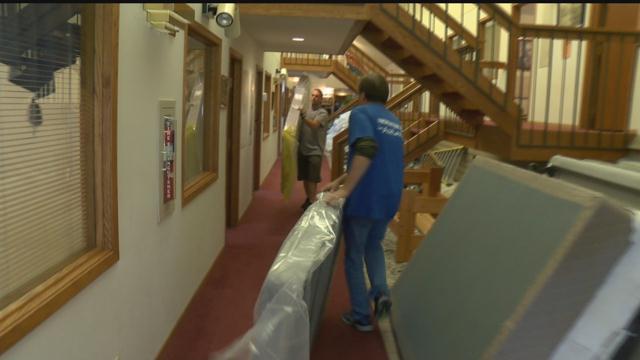 Steinhafel's Furniture showed up with a donation of more than 50 mattresses for the place where families can stay while loved ones are receiving medical treatment.

Kathy's House Executive Director Patty Metropulos says that 15,000 guest have stayed at Kathy's House since it opened in 2001 and this donation was really needed.

"Typically they stay between 7 and 8 nights" explained Metropulos. "That comes to 105,000 nights of lodging.  So, our mattresses have served their purpose, they need to exit the building."

When Steinhafel's learned of the need for new beds, it teamed up with Temper-Pedic to make the donation possible.

"The beds were pretty good," said guest Ann Aiken who's in from Alabama. "It's amazing that they're getting new beds and I'm actually looking forward to going to bed tonight, because I think it's gonna be awesome."

Dozens of volunteers helped moved in the new beds. It was an all day effort and a true example of community.

A young wife and mother of three small daughters, Kathy Vogel Kuettner was diagnosed in the spring of 1999 with Burkitt's lymphoma, a form of non-Hodgkin's lymphoma. She underwent multiple rounds of chemotherapy and a bone marrow transplant from her oldest sister, Susan. She was only out of the hospital less than a month when the cancer returned. Doctors told her that there was nothing more that could be done, as non-Hodgkin's lymphoma tends to hide from chemotherapy and radiation. After fighting a year-long battle against this tenacious and rare form of cancer, 39 year-old Kathy passed away on July 4th, 2000.

Kathy was a person of kindness, generosity and true compassion. She was friendly to everyone, loving and caring to those close to her, and tolerant and forgiving of people's quirks and shortcomings. She had a wide and deep network of support during her illness and often her hospital room was full of visitors. During her time in the hospital, she learned that many patients had few visitors to help support their journey. Her nurses also lamented the lack of a Milwaukee area hospital hospitality house for families where the patient is an adult (there is the Ronald McDonald House but they serve children patients only).

Before her death, she expressed a wish to her family that they open a house to help other adult cancer patients and their families. Her parents, Judy and Dick Vogel, began working on Kathy's House shortly after her death. Through fund-raisers, donations and one year of hard work, Kathy's House opened in the summer of 2001 at 600 N. 103rd Street in Milwaukee and has been fulfilling Kathy's wish ever since.