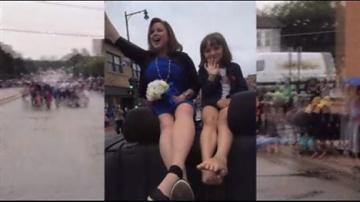 WEST ALLIS-I know parades are about the floats, the costumes, bands and tributes. But for me it's always been about the people I see along the parade route and the personal connections I've made especially with the West Allis Independence parade.

Most precious to me is a little girl named Mykala who tags along with her mom who drives the car provided for me by International Autos.

Last year she rode shotgun. But this past July 2nd, I convinced her to ride along with me and wave to the crowd. That made room for her cousin Bella to ride in the passenger seat.

They, like myself, love to dress up in red, white and blue. Although the little ones outdid me with their patriotic painted fingernails and toenails.

For me as a woman in broadcasting, it has always been a challenge to be recognized for ability and talent. Most just want to make assumptions and judgment based on appearance.

That's why I see this parade as an opportunity to reach our to girls and show them that personality and aspirations matter in developing as a whole human being.

I'm not the only one who sees the parade as an opportunity to mentor.

I came across the Miss West Allis queens, a collection of title holders in various age groups who all could easily go on to become Miss America.

I also had the pleasure of meeting the dancing grannies who prove beauty and vitality have no age limit.

Each group stopped to chat and pose for some \"selfies\" with a ready smile and wishes for a happy holiday.

We brought the top down on the brand new BMW I rode in at the start of the parade since the clouds were starting to part.

In the middle of our journey along Greenfield Avenue the rain began to fall.

But Mykala and I held our position, continued to wave and smile, just like all the welcoming faces along the route.

All of us in the car were soaking wet like all the parade goers who wouldn't let the weather stop them from celebrating how wonderful it is to live in the United States where a democracy, however dysfunctional at times, still exists.

It reminded me that in a job that is so public and often full of negativity, I have unique opportunities that also make it the best profession for me.

May you have a happy and safe July 4th holiday!