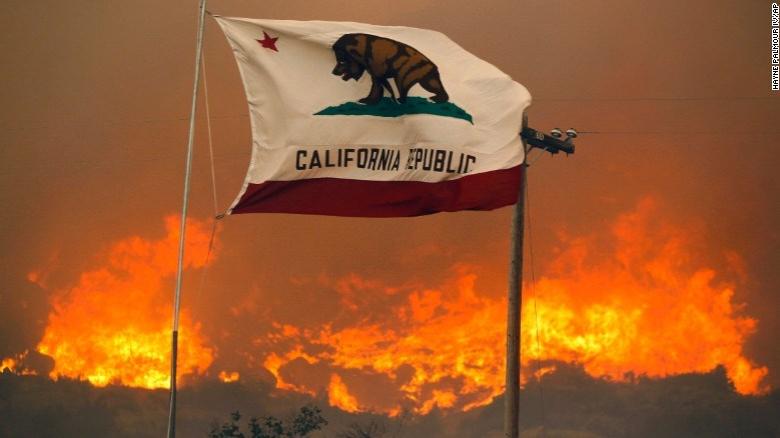 (CNN)After the heat comes the fires.

Following a record-setting, lethal heat wave that hit the Southwest U.S. on summer's first day, more than a dozen wildfires have popped up all throughout the region as of late Monday.

Three of them had scorched more than 30,000 acres by the end of the day:

The Juniper Fire in Arizona, which is 30% contained and has been burning for more than a month

The North Fire in New Mexico, which is also 30% contained and has been burning for nearly a month

The Jack Fire in Arizona, which is also 30% contained

Three other significant fires are burning in the trio of states as of early Tuesday.

The Cedar Fire in Arizona has scorched 26,739 acres and was 40% contained

The Dog Head Fire in New Mexico has scorched 17,891 acres and was 46% contained

The Sherpa Fire in California has scorched 7,893 acres and was 62% contained Another wildfire popped up in the San Gabriel Canyon near Los Angeles Monday, quickly consuming about 1,500 acres.

Billowing smoke could be seen from nearby Dodger Stadium.

CNN affiliate KCBS reports that in addition to that blaze, which is being dubbed the Reservoir Fire, another fire started nearby in Fish Canyon.The so-called Fish Fire has consumed 3,000 acres and has not been contained at all, according to LA County Fire officials.

The two had not combined as of 8:30 p.m. PT, the county fire department said on Twitter.

About 700 firefighters are on the scene to battle the pair, KCBS reported.Also in the Los Angeles area, the city of Burbank -- which is home to Warner Brothers and Walt Disney studios -- hit 111 degrees Fahrenheit, setting a new record, according to the National Weather Service.

The hottest temperature recorded in the United States on Monday also came in California, but further north. It was 126 degrees in Death Valley, the NWS said.

Elsewhere in California, evacuations were ordered in San Diego County as fires continue to rage near the U.S.-Mexico border. And a large wildfire in Santa Barbara County also forced mandatory evacuations.The record-setting heat has been deadly in Arizona, where six people were killed over the weekend, authorities said.

Five hikers died -- two in Phoenix and three near Tucson -- according to authorities.

A search was suspended Monday to protect searchers from the heat, but is expected to resume Tuesday, CNN affiliate KGUN reported."It's just too dangerous for my team to be out here," Nanos said.

It was so hot, a woman in her fifties died from heat exposure while going for a walk in the middle of the city, Nanos said.

Nanos urged people to stay indoors for their safety -- and for the safety of others.

"If not for your own safety, [then stay inside] for the safety of my team and these volunteers who come out here and do this all the time," he said. "This week, until these temps come down, get your exercise at home. Get your exercise indoors. Or just stay inside. It's too hot."

The following map from the National Weather Service shows the parts of the United States that are currently under heat advisories (pink areas face excessive heat warnings, while areas in orange face heat advisories).Much of the current heat wave can be attributed to a so-called heat dome -- a pattern that can lead to record-setting temperatures and heat waves -- according to CNN Meteorologist Rachel Aissen. A heat dome occurs when air is capped by the upper atmosphere in the same location: The air hits the cap and returns to the surface, continuing to heat it like a convection oven.