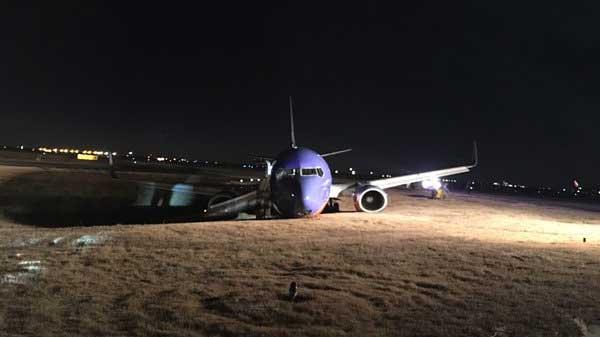 (CNN)A Southwest Airlines flight rolled off a taxiway and got stuck after landing Tuesday at Nashville International Airport, said a spokeswoman with the Federal Aviation Administration.

A Southwest spokesman said the nose gear of the Boeing 737 collapsed.

The Nashville Fire Department said that it transported eight people, but reported only minor injuries, "mostly bumps and bruises."

Pictures from the scene showed a plane against the ground at an angle, as if the support on one side had collapsed.

"Southwest Airlines 31, a Boeing 737 aircraft, rolled off a taxiway into the grass and got stuck while taxiing to its gate at Nashville International Airport at 5:30 p.m. Central Time. Passengers left the aircraft via stairs and were bussed to the terminal," said FAA spokeswoman Kathleen Bergen.

Five crew members and 133 passengers were on board the plane at the time of the incident, according to Southwest Airlines.

The FAA is investigating.

There did not appear to have been bad weather in Nashville. Skies were clear with a reported temperature of around 55° Fahrenheit on Tuesday evening.

The flight had come in from Houston.