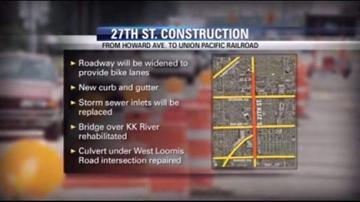 MILWAUKEE--The project to repave and widen South 27th street between Howard Avenue and the Union Pacific Railroad bridge has a $9.1 million price tag. But there could be no price tag for  commuters, business owners as well as employees in the area affected.

Omega restaurant has seen a 15% to 20% decline in business. The owner and employees blame it on the inability of clients to find a way in and out of their establishment. The owner adds, that when you're dealing with employees of the nearby St. Luke's Hospital for example, their one hour lunch break is limited, and many are choosing to go somewhere else.

The construction project, which is only in its first stage, on the west side of 27th street, has closed down some of the southbound lanes, leaving commuters only one lane, and made it difficult according to those with business in the area, to maneuver the detours.

The project is not expected to wrap up after work on the east side of 27th street wraps up. Sometime in mid-November.

Meantime, work on the west side of 27th street will last until mid July, then switch over to the east side, where some businesses, like those of Satpal Sihng are already reporting a %65 drop in business. He expects that if things are this bad before work begins on his side of the street, he may be looking at a 90% drop in business. He says however, that closing is not an option.

Meantime, the city says in its website, that  the road will gain a new concrete pavement, greater width to accommodate bike lanes on each side, new curbs and sidewalks and decorative crosswalks. There will also be improvements to the bridge over the Kinnickinnic River.

As far a bus service, it won't change, though bus stops will move to medians whenever construction prevents stopping at the curb.

For more information on the project: please check the City of Milwaukee's web page dedicated to the 27th street construction project: