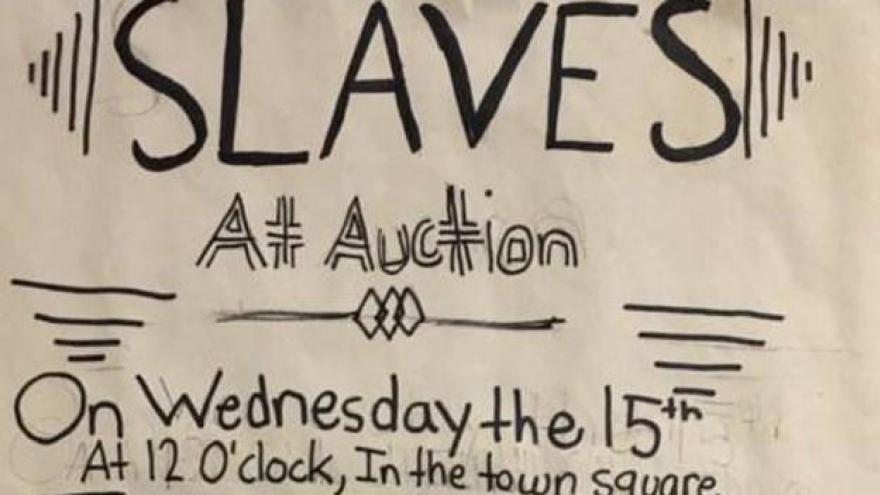 SOUTH ORANGE, N.J. (CBSNewYork/AP) — Posters for slave auctions created by fifth-graders have been removed from a New Jersey school hallway after some parents questioned the assignment.

Superintendent John Ramos said in a note to parents that the assignment at South Mountain Elementary School was part of a larger three-part Colonial America project that’s been used for 10 years.

Students were told to select a colony to research and then were given a “menu” of tasks, which included creating “a colorful poster advertising an event that might occur during your time period and colony.” The assignment listed several examples including a slave auction.

Some parents became outraged when they saw the posters while visiting the school this week for teacher conferences, NJ.com reported.

“Educating young students on the harsh realities of slavery is of course not the issue here, but the medium for said education is grossly insensitive and negligent,” one parent wrote on Facebook. “It is completely lost on me how this project could be an effective way to teach any student in any age group about American history.”

One poster listed the names of available slaves, who included 12-year-old Anne, “a fine housegirl,” and 22-year-old Jordan, “a great cook.” Another poster specified that only cash would be accepted.

Ramos said the school consulted with anti-bias education experts when concerns were raised about the assignment when it was first sent home to students.

“One of the anti-bias experts highlighted the fact that schools all over our country often skip over the more painful aspects of American History, and that we need to do a better job of acknowledging the uglier parts of our past so that children learn the full story,” Ramos said.

Ramos said the completed projects should have been accompanied by an explanation.

“We completely understand how disturbing these images are, and why parents were upset. This was exacerbated by the fact that the displays did not include an explanation of the assignment or its learning objectives,” Ramos said.

The South Orange School District is planning a community meeting to discuss whether the assignment is appropriate for fifth-graders.

“Some families are supportive of the example of a slave auction poster included in the assignment because they see it as an important opportunity to examine this shameful and too-often ignored chapter of American history,” Ramos said. “Others are disturbed that elementary students were being asked to put themselves in the virtual shoes of people who subjugated others.”

Ramos apologized for any “unintended offense or hardship.”