Soccer team found alive in cave after more than a week 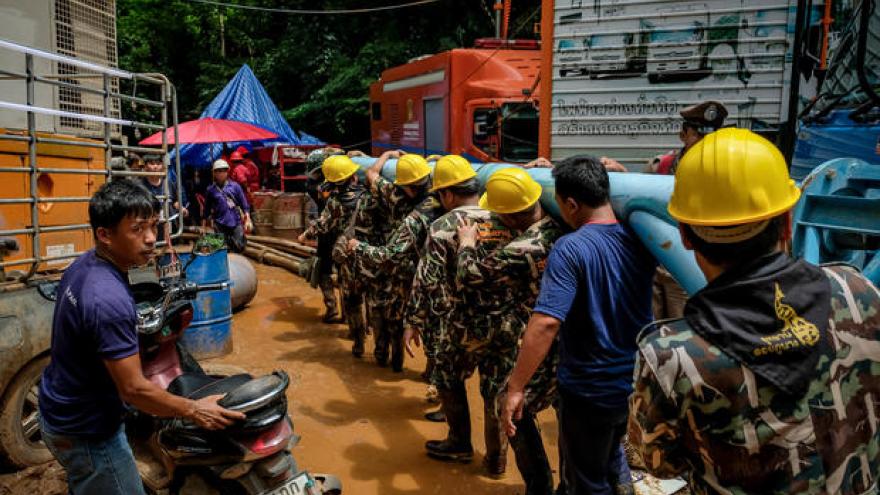 MAE SAI, Thailand -- Rescue divers on Monday found 12 boys and their soccer coach alive in a cave after they went missing more than a week earlier in northern Thailand. The rescue teams spent much of Monday making preparations for what was hoped would be the final push in their search for team. It was, and hours later Chiang Rai provincial Gov. Narongsak Osatanakorn confirmed that all of the 13 missing individuals had been found alive. Their conditions were not immediately clear.

"We found all 13 safe," Osatanakorn said, according to the French news agency AFP. "We will take care of them until they can move."

The divers had concentrated Monday on securing a rope line and placing oxygen tanks along the narrow passageway that led them to the boys, aged 11 to 16, and their 25-year-old coach, who disappeared when flooding trapped them after entering the Tham Luang Nang Non cave on June 23.

Thai navy SEAL divers and rescue workers from other countries made initial progress through the narrow passageway early Monday after passing through a key chamber on Sunday whose high, murky waters had previously blocked their progress.

Narongsak said the passageway the divers were making their way through goes upward in some places and downward in others and is extremely narrow, which made it difficult for divers with all their gear to fit through.

Divers were stymied again and again by muddy water rising filing sections of the cave and forcing them to withdraw for safety reasons. When water levels dropped Sunday, the divers went forward with a more methodical approach, deploying a rope line and extra oxygen supplies along the way.

The SEALs' Facebook page said that since Sunday night, the divers had reached a bend where the half-mile-long passage splits in two directions. The divers are aiming for a sandy chamber on higher ground in the cave, where they believe the group would be safe.

On Monday, they again employed the methodical, safety-first approach to make it through the passageway.

Narongsak explained Monday that fixing rope lines and deploying oxygen tanks along their route allowed the divers to operate.

Public anticipation for a rescue has been high since Sunday, but officials have avoided setting a timetable for the search and rescue operation. They publicly remained optimistic.

"In theory, human beings can last 30 days (without food)," Narongsak told reporters earlier Monday. "We hope and believe that is the case. We all still have hope."

In addition to the divers, teams have been working to pump out water as well as divert groundwater. Other efforts have focused on finding shafts on the mountainside that might serve as a back door to the blocked-off areas where the missing may be sheltering.

Teams have been combing the mountainside looking for fissure that might lead to such shafts. Several have been found and explorers have been able to descend into some, but so far it is not clear whether they lead to anywhere useful.