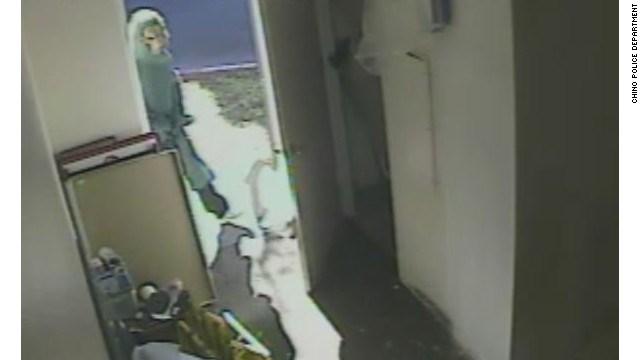 (CNN) -- A man wearing a werewolf mask shot a worker at a check-cashing business in Southern California and fled, sparking a massive hunt, authorities said.

Police are searching for the masked assailant, who shot the worker in the head during the attack in Chino on Friday.

The victim -- a 58-year-old man -- was a construction worker at the business and is expected to survive, police said.

His co-worker, Armand Soliano, said they thought it was a prank when the assailant walked in. He opened fire without speaking to anyone.

\"He didn't say a word,\" Soliano told CNN affiliate KABC. \"He shot him in the head for no reason.\"

At the time of the incident, the business was closed for renovations, but it had its back doors open.

\"The suspect entered the business ... through an open rear door and shot the victim upon encountering him inside,\" said Lt. Aaron Kelliher of the Chino Police Department.

After the shooting, the assailant took off on foot. Despite an \"exhaustive search,\" the gunman was nowhere to be found, Kelliher said.

The victim was treated at a local hospital and released. The motive of the shooting is unclear.