Should police be allowed to shame suspects on Facebook? 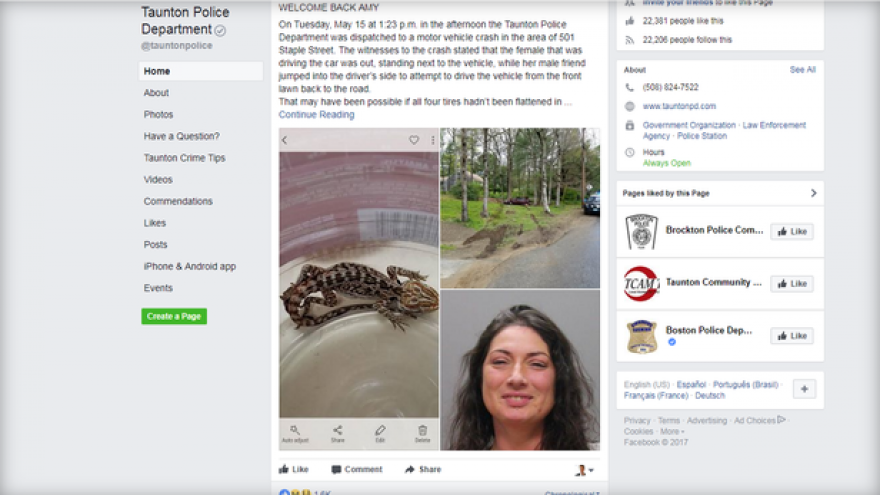 BOSTON -- A driver mows down six mailboxes, slurs her words and tells police she has a lizard in her bra. Throw in a wisecracking police officer, and what do you get? A flippant post on Facebook, along with photos of the woman, and of course, her lizard.

Not everyone is amused.

Police departments are increasingly using Facebook to inform the community about what they're doing and who they're arresting. Some add a little humor to the mix. But civil rights advocates say posting mugshots and written, pejorative descriptions of suspects amounts to public shaming of people who have not yet been convicted.

"It makes them the butt of a joke on what for many people is probably their worst day," said Arisha Hatch, campaign director of Color of Change, a civil rights advocacy organization that recently got Philadelphia police to stop posting mugshots on its Special Operations Facebook page.

In Taunton, a city of 57,000 about 40 miles south of Boston, the police department's post about the woman with a lizard in her bra was shared around Facebook and got heavy news coverage.

Lt. Paul Roderick wrote that Amy Rebello-McCarthy hit mailboxes, sending some airborne, before her car left the road, tore up a lawn and came to rest among trees. When police arrived, she asked them to call a tow truck so she and a male companion "could be on their way," Roderick wrote.

"Sorry Amy, we can't move the car right now. If we do, what will you use to hold yourself up?" he wrote.

Roderick described how she told police she had a lizard.

"Where does one hold a Bearded Dragon Lizard while driving you ask? Answer: In their brassiere of course!!"

Many commenters praised police. "Great job (getting drunks off the road and entertaining us)," one woman wrote.

But others said the tone was inappropriate.

"Hey Taunton Police Department ... Your holier than thou attitude is part of the reason why people don't like/don't respect police," one man wrote.

Rebello-McCarthy, who has pleaded not guilty to drunken driving and other charges, did not respond to attempts for comment.

Police have traditionally made mugshots and details on suspects available to journalists for publication. But journalists, for the most part, selectively choose to write stories and use mugshots based on the severity or unusual nature of the crime. Many crimes don't get any coverage.

Roderick said everything he wrote in the posting about Rebello-McCarthy was true.

"I guess I don't see a problem with it," he said in an interview.

"Can you go too far? I guess you could. I don't think I did. I'm just trying to report what's happening."

Still, Roderick did get a mild reprimand from the police chief. "He basically said, 'Tone it down a little bit,'" Roderick said.

Jaleel Bussey, 24, of Philadelphia, said he nearly got kicked out of a cosmetology school when instructors saw his mugshot on Facebook. Bussey was charged in 2016 after drugs were found during a police search of a house he was visiting to style a client's hair. Most of the charges were dismissed before trial; he was acquitted of the final charge, according to the Philadelphia public defender's office.

Bussey said he was allowed to continue school after explaining that he did not have any drugs and that the charges had been dropped. He felt humiliated, he said, when his family and teachers saw his mugshot.

"I was angry at the time," he said. "I was found not guilty. They're just putting people's faces up there like it's OK."

In Marietta, Georgia, police poked fun at a man suspected of shoplifting from a pawn shop.

"Sir, you must have forgot that you gave the clerk your driver's license with ALL of your personal information as well as providing him with your fingerprint when completing the pawn ticket before you stole from him which, by the way was also all on camera. ... When you make it this easy it takes all the fun out of chasing bad guys!" police wrote in December.

In some communities, posting mugshots and glib write-ups has created a backlash.

In South Burlington, Vermont, Police Chief Trevor Whipple was in favor of posting mugshots at first, but then he started noticing disparaging comments about everything from suspects' hairstyles to their intelligence. The department stopped the practice after about a year.

"Do we want to use our Facebook page to shame people?" Whipple said. "Legally, there's no problem - all mugshots are public - but the question became, is this what we want to do?"