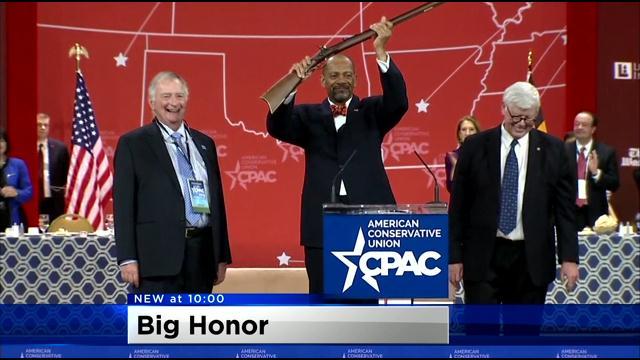 Milwaukee County Sheriff David Clarke said he was surprised and humbled when his name was announced at CPAC Friday night as the recipient of the Charlton Heston Courage Under Fire Award.

After some handshakes and a hug he then hoisted the award, a firearm, above his head to thunderous applause before the conservative crowd in Washington D.C.

\"I just want to be a foot soldier in the movement, that's all I ask,\" Sheriff Clarke said. \"Give me a job. And I want that job in this movement to help move it forward.\"

The Sheriff said he regretted not wearing his cowboy hat like his heroes John Wayne and Ronald Reagan.

He thanks the NRA for their personal support in what has been a challenging year for the Sheriff who has felt those who support gun rights and conservative values have been maligned.

The sheriff also said that while many think conservatives don't like black people, \"I know otherwise.\"