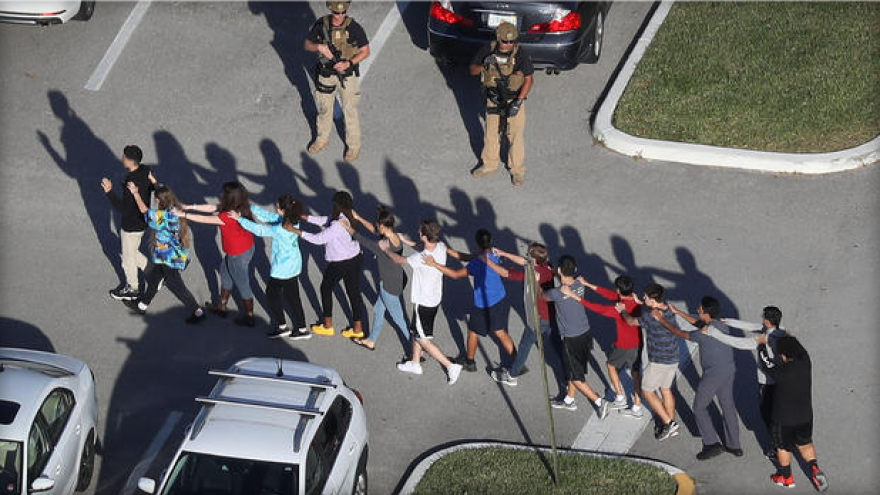 Scot Peterson, the school resource deputy, was "absolutely" on campus through the event, armed and in uniform, Israel said Thursday. After seeing video and reviewing witness statements and Peterson's own statement, Israel said he decided to suspend Peterson without pay pending an internal investigation.

Israel said the video shows Peterson arriving at the west side of Building 12 and taking up a position, but he didn't go inside. Israel said Peterson "clearly" knew there was a shooter in the building and was outside for about four minutes. The shooting lasted about six minutes, Israel said.

When asked what the deputy should have done, Israel said, "Went in, addressed the killer, killed the killer."

Israel said he was "devastated, sick to my stomach, there are no words."

The department also released a description of 23 calls for response involving Cruz in the years and months prior to the shooting. Two other deputies were placed on restricted administrative duties as the department investigates whether any policies were violated in response to two of the calls, Israel said.

Once call involved "third-hand information from a neighbor's son" on Feb. 5, 2016 that Cruz had threatened on Instagram to shoot up a school and there were pictures of him with guns. It wasn't known which school was the subject of the reported threat. There had been a "one month delay" in the report, the document said.

A deputy responded and made contact with the caller, who wished to remain anonymous, and it was determined the Cruz had knives and a BB gun. The information was forwarded to the Stoneman Douglas resources officer, which the sheriff's office confirms was Peterson, but it's not clear whether any steps were taken after that. The call has prompted an internal affairs investigation and a review.

In the other report from Nov. 30, 2017, the caller said Cruz is collecting guns and knives and wanted to join the Army. The caller said he was concerned Cruz would kill himself one day and may be a school shooter in the making. The caller said Cruz no longer lived at the Parkland address and was now living in Lake Worth. The caller believed weapons were kept at a friend's home in a different location.

A deputy contacted the caller, who was located in Massachusetts, over the phone. No report was initiated, and the deputy later said he referred the call to the Palm Beach Sheriff's Office.

The FBI has admitted it also received a tip from someone concerned that Cruz could be a school shooter, but the tip wasn't properly forwarded.