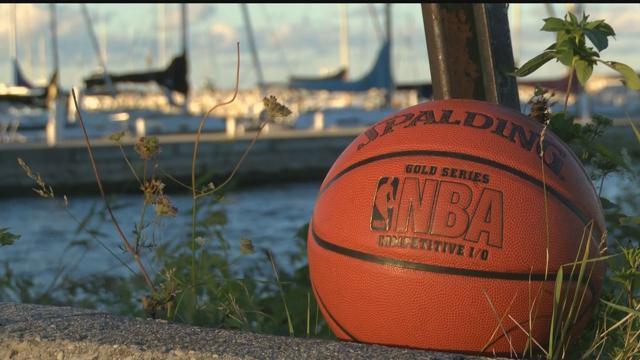 Take one step inside the locked doors at Sheboygan's Municipal Auditorium and Armory, and it's clear the building hasn't been used in years.

Dust has settled on the old gymnasium floor, and puddles of water have formed in the lower level. Two baskets hang at either end of the gym, but it's been years since a basketball has made it anywhere near either.

So why would an NBA team want to house a D-League team here? One word: History.

Built in 1941, the Armory once housed the Sheboygan Red Skins, one of 17 NBA teams when the league debuted in 1949.

The team would only last one year, but the stadium remains.

"It's a very unique building," says former NBA player Joe Wolf. "I think it lends itself to a lot of different events."

Wolf is leading a charge to bring professional basketball back to the small city along the lake. The Milwaukee Bucks have finalized their locations for a potential D-League team to Oshkosh, Racine, and Sheboygan. Earlier this week, Racine announced plans to build a brand new arena for a potential team.

"Who wants new?" says Wolf. "I'd rather have history."

His proposal calls for a complete renovation of the old armory, paid for by donors throughout Sheboygan County.

"It will be a new venue when we get done with it, but it will have the bones of the history, and that's really cool to see."

Wolf says the Bucks came to visit the potential site earlier this month, and he believes his location has a shot.

"Any time you're a basketball person, and you walk into an arena, especially one with history, you kind of get the chills and go wow, this is pretty cool. And that's what this is, this is really cool," says Wolf

The Bucks have not announced a timeline to name a location.