'Sesame Street' adds Julia, an autistic character, to its cast 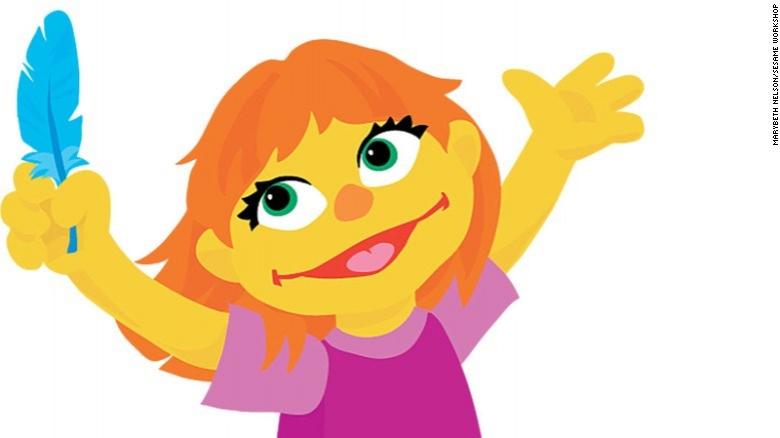 (CNN)All cheers for Julia, the newest friend to join Elmo, Big Bird and the "Sesame Street" family in a new program designed to spread awareness about children with autism.

The bright-eyed and cheerful little girl plays an essential role in Sesame Street and Autism:  See All in Amazing Children, an initiative launched Wednesday to promote awareness about autism.

One in 68 U.S. children has an autism spectrum disorder (ASD), according to a report by the Centers for Disease Control and Prevention. A 2014 report by the CDC estimates that 1 in 42 boys has autism, 4.5 times as many as girls (1 in 189).

The Sesame Street and Autism: See All in Amazing Children program is available as an app and on desktop. It includes daily routine cards and resources to help family, friends and others who encounter children with autism.

Sesame Workshop partnered with 14 other organizations, including the Yale Child Study Center and Autism Speaks, on the initiative.

In the digital storybook, Elmo plays with Julia on the playground and helps his friend Abby Cadabby understand that Julia plays differently than them. Through his patience and understanding, he helps Abby understand Julia.

"Elmo's daddy told Elmo that Julia has autism," he says. "So she does things a little differently. Sometimes Elmo talks to Julia using fewer words and says the same thing a few times."

As the group goes on a quest for a snack, Julia places her hand over her ears when inside Hooper's store.

Opinion: Why 'Sesame Street's' Sonia Manzano is a Latino icon

"Sometimes she hears noises that Elmo doesn't notice. Like the noise the blender makes. She really doesn't like it!"

The website also tells the story of the character Benny and the real-life stories of Nasaiah and Thomas.

Sesame Street is using #SeeAmazing to encourage people to share their stories, videos and pictures on social media to keep the conversation and network of support ongoing.