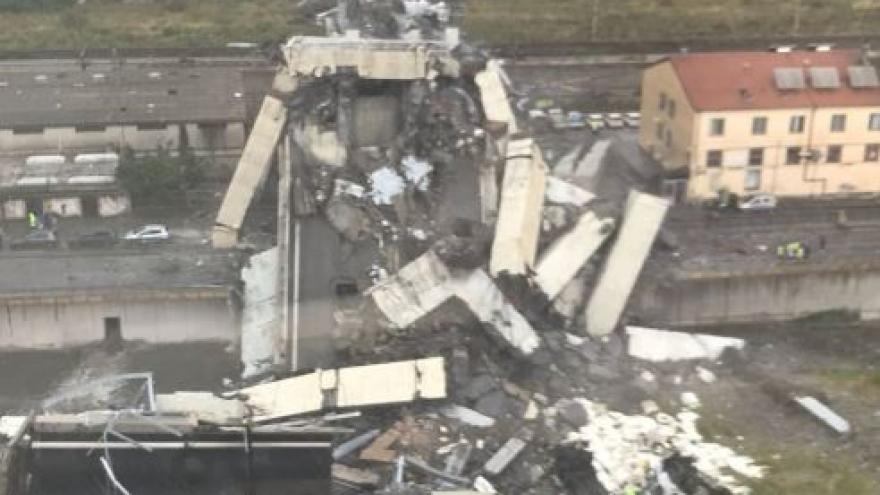 GENOA, Italy (AP) — Italian emergency workers pulled two more bodies out of tons of broken concrete and twisted steel Wednesday after a highway bridge collapsed in Genoa, raising the death toll in the disaster to at least 39 people.

The collapse of the Morandi Bridge sent dozens of cars and three trucks plunging as much as 45 meters (150 feet) to the ground Tuesday as many Italian families were on the road ahead of Wednesday's major summer holiday. The collapse took place after a violent storm.

Civil protection authorities confirmed Wednesday that 39 people had died and 15 were injured. Interior Minister Matteo Salvini said three children were among the dead.

Working with heavy equipment, rescuers climbed over concrete slabs with sniffer dogs all through the night and into the day, searching for survivors or bodies.

Investigators, meanwhile, were working to determine what caused an 80-meter (260-foot) long stretch of highway to break off from the 45-meter (150-foot) high bridge in the northwestern port city.

Italian politicians, for their part, were trying to find who to blame for the deadly tragedy.

The 1967 bridge, considered innovative in its time for its use of concrete around its cables, was long due for an upgrade, especially since the structure was more heavily trafficked than its designers had envisioned. One expert in such construction, Antonio Brencich at the University of Genoa, had previously called the bridge "a failure of engineering."

An unidentified woman who was standing below the bridge told RAI state TV that it crumbled Tuesday as if it were a mound of baking flour.

Engineering experts, noting that the bridge was 51 years old, said corrosion and weather could have been factors in its collapse.

The Italian CNR civil engineering society said structures dating from when the Morandi Bridge was built had surpassed their lifespan. It called for a "Marshall Plan" to repair or replace tens of thousands of Italian bridges and viaducts built in the 1950s and 1960s. It said that simply updating or reinforcing the bridges would be more expensive than destroying and rebuilding them with new technology.

Mehdi Kashani, an associate professor in structural mechanics at the University of Southampton in the U.K., said pressure from "dynamic loads," such as heavy traffic or strong winds, could have resulted in "fatigue damage" in the bridge's parts.

Italy's minister of transportation and infrastructure, Danilo Toninelli, said there was a plan pending to spend 20 million euro ($22.7 million) on bids for significant safety work on the bridge.

While the collapse's cause is yet to be determined, political bickering moved into high gear Wednesday.

Toninelli, from the populist 5-Star Movement, threatened in a Facebook post that the state, if necessary, would take direct control of the highway contractor responsible for the bridge if it couldn't properly care for the roads and bridges it was responsible for.

State radio reported Wednesday that some 5-Star lawmakers in 2013 had questioned the wisdom of an ambitious, expensive infrastructure overhaul program as possibly wasteful, but that a post about that on the Movement's site was removed Tuesday after the bridge's collapse.

Within hours after the collapse, Salvini was trying to shift the blame away from Italy's new populist government, vowing not to let European Union spending strictures on Italy, which is laden with public debt, stop any effort to make the country's infrastructure safe.

Genoa is a flood-prone city, and officials were warning that the debris from the collapse must be removed as soon as possible. Some of the wreckage landed in a dry riverbed that could flood when the rainy season resumes in a few weeks.

MILAN (AP) — Italy's leader says 22 people have been killed and 16 injured in a highway bridge collapse in Genoa and he fears that the final death toll may rise further.

Premier Giuseppe Conte traveled to the site of the disaster late Tuesday in the port city, calling it an "immense tragedy." He told RAI state TV "it is shocking to see the twisted metal and the bridge collapsed with victims who were extracted."

Conte also praised the hundreds of rescue workers still at the site, saying "they saved people who fell 45 meters (nearly 150 feet) and are now alive and in the hospital."

MILAN (AP) -- A man who was under the highway bridge that collapsed in Italy calls it "a miracle" that he survived.

The middle-aged man tells local Italian TV that he was standing in front of his truck under the bridge in the city of Genoa when the structure collapsed Tuesday. He spoke in Italian as he was being filmed walking away from the disaster site but did not give his name.

He says the shockwave sent him flying over 10 meters (33 feet) into a wall, injuring his right shoulder and hip.

He says "I was in front of the truck, and flew away like everything else. Yes, I think it's a miracle. I don't know what to say. I'm out of words."

An official at Italy's Civil protection agency says at least 20 people died and 16 were injured in the bridge collapse.

MILAN (AP) -- The Italian news agency ANSA citing the Interior Ministry says that 11 people are confirmed dead in the collapse of a highway bridge in the port city of Genoa.

ANSA reported Tuesday that five people are injured and in serious condition. The Interior Ministry press office could not immediately confirm the fatalities.

An official with Italian firefighters, Amalia Tedeschi, told RAI state TV that some 20 vehicles, including cars and trucks, had been involved in the collapse. She confirmed that two people had been extracted alive from vehicles, with injuries.

Tedeschi said that sniffer dogs are at work in the rubble looking for more injured and victims. In addition, heavy equipment was being moved in so they could lift pieces of the bridge.

Tedeschi said the part of the bridge that collapsed was about 80 meters (yards) in length. Media reports had earlier put it at 200 meters.

MILAN (CBSNews) -- The Italian news agency ANSA says a raised highway has partially collapsed in the northern port city of Genoa. There was no immediate confirmation of deaths or injuries, but Italian media said rescuers were digging through rubble to try and find people in cars that fell through the collapsed section. Some agencies reported multiple deaths, but authorities have confirmed nothing about casualties.

ANSA said authorities suspected that a structural weakness caused the collapse on Tuesday. Italian media said the portion of highway that collapsed was about 200 yards long. Images tweeted by Italian police showed the highway through the city with a large section missing.  Emergency vehicles were responding.

French news agency AFP said it was a portion of the four-decade old Morandi highway bridge that had collapsed. Italian fire services said the bridge, in an industrial area in west Genoa, fell down at 5 a.m. Eastern time.

A fire service spokesperson told AFP the bridge collapsed primarily onto rail tracks about 100 yards below and that "cars and trucks" had fallen with the rubble.

Witnesses told Sky Italia that they believed at least 10 vehicles were trapped under the rubble. Another video tweeted by the Italian state police showed part of the actual collapse in what appeared to be cell phone video.

Italy's government Transport Minister Danilo Toninelli said the collapse appeared to be "an immense tragedy," but he did not immediately confirm any casualties.