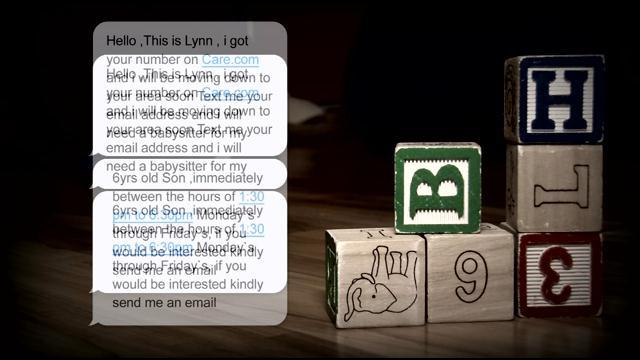 Kara Hanson knows the ABC's of babysitting. She's been taking care of little ones for the better part of a decade and thought she could pick up more jobs using a popular care giving website.

\"I didn't know anybody and I needed to find a job and it was something that I was good at and knew I could do,” Hanson said.

Care.com was seemingly a perfect match. Hanson exchanged information with different families, eventually meeting up for work. But, then she started getting strange messages.

The messages all referenced care.com. The sender would mention having a disability preferring communication by text or email, and usually lived out of state. It would end with promises of big money for help taking care of their child.

\"They tell you that they're going to pay you one thousand dollars up front and then get all your bank account information and then take all your funds from you,\" Hanson said.

Some have taken it even further, sending an actual check to caregivers, asking them to cash it and then wire a portion of the money back. Hanson noticed the strange wording in the messages and became suspicious; eventually realizing it was all a scam.

\"I just knew something was off.\"

The FTC warns babysitters that they could lose out on hundreds even thousands of dollars if they're not careful on nanny websites. CBS 58 reached out to care.com about how they protect members from sketchy people. They sent out a statement outlining ways to avoid the fakes, a similar page could be found on their website. If babysitters fall victim, they're on their own.

\"It's just kind of strange and you don't know who to trust.\"

Hanson was able to steer clear of the scams, but says she can't take back the time she wasted vetting prospective work.