San Bernardino Shooting: 'What is the Motivation for This?' 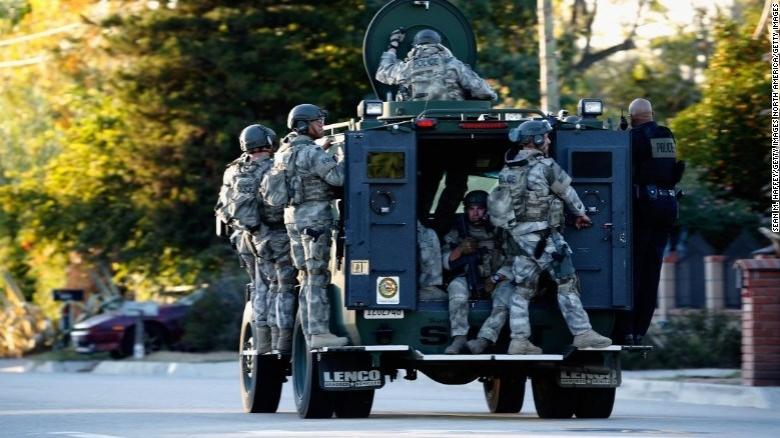 (CNN)They left no manifesto. The hard drive was gone from their computer. And their new cell phones were apparently smashed.

Syed Rizwan Farook and his wife Tashfeen Malik did their best to fly under the radar. Neither got into trouble with the law. And neither one was on any list of potentially radicalized people.

So, a day after one of the deadliest mass shooting in the United States, authorities are still left wondering what motivated the couple to mow down dozens of people at a holiday luncheon in San Bernardino, California. Fourteen people died and 21 were injured.

Officials say part of the reason may have been Farook's apparent radicalization. Part of it may have stemmed from workplace tensions.

But nothing concrete has surfaced.

"It would be irresponsible and premature for me to call this terrorism," said FBI official David Bodwich on Thursday. "The FBI defines terrorism very specifically, and that is the big question for us: What is the motivation for this?"One avenue investigators are exploring are Farook's communications with at least one person who was being investigated for possible terror connections. Some were by phone, some conducted on social media.

"These appear to be soft connections," an official said, meaning they were not frequent contacts. Farook's last communication with the contacts was months ago.

The FBI wants to interview some of them to learn more about their conversations with Farook.

A federal official said Farook has "overseas communications and associations" but it's not yet clear how relevant they are to the shootings. "We don't know yet what they mean," the official said.

There are no clear ties to overseas terrorists groups so far.Farook had traveled to Saudi Arabia and to Pakistan. But should that raise any suspicions? Islam requires believers to go on a pilgrimage to Mecca in Saudi Arabia once in their lifetime.

His trip to the Hajj raised no red flags, two officials said.

While there, he met Malik, whom he later brought to the United States on a fiancee visa.

Farook is known to have taken at least one more trip to Saudi Arabia, which lasted nine days.

Did that trip help offer a motive? Officials don't yet know.Could Farook's decision to attack the luncheon have stemmed from a religious dispute with a coworker? One of them, Nicholas Thalasinos, liked to discuss religion and politics.

He was one of the people killed in the Wednesday attack at Inland Regional Center.

Farook and Thalasinos, reportedly a devout Messianic Jew, once had a "heated, passionate" discussion, said Kuuleme Stephens, a friend of Thalasinos, who had called him at work.

The men were sticking by their strongly held positions but were not fighting, Stephens said.

Thalasinos' widow, Jennifer, said he was very verbal about terrorism. "He's very upset about what ISIS has been doing and the radicalized Muslims," she said.

Whatever the motive, investigators' work to uncover it has been made difficult because the couple appeared to have done a good job covering their tracks.

Two smashed cellphones, both relatively new, were recovered from a garbage can near one of the crime scenes, law enforcement officials said.

A computer found at the shooters' home was missing a hard drive. Investigators suspect it was removed and perhaps destroyed.

Investigators have issued subpoenas to major email and other service providers to try to retrieve the couple's communications.Even those who knew the couple said they didn't raise any red flags.

Doyle Miller, Farook's landlord, said he had "no cause for concern" when he rented out a townhouse to him in Redlands.

"He had no red flags whatsoever; everything checked out," Miller said. "He had good credit reports ... everything."

A religious leader who knew Farook described him as quiet.

"He's a little bit shy, a little bit withdrawn. He doesn't mix with people easily," said Mustafa Kuko, who's the director of the Islamic Center of Riverside where Farook was a regular.

Even his family appeared flabbergasted over the attack.

"I have no idea why he would he do something like this," said Farook's brother-in-law Farhan Khan. "I have absolutely no idea. I am in shock myself," Khan said. "I don't have words to express how sad and how devastated I am."But the meek impression belied the heartless act Farook carried out with Malik.

First, at the luncheon, armed with .223-caliber long guns and with pistols, they fired 65 to 75 rounds, almost as many as there were people at the luncheon.

Later in the shootout with police that killed them, they fired about the same number of rounds at officers. Two were injured in the gun battle.

In Farook's home, police found thousands of rounds of ammunition, 12 pipe bombs and hundreds of tools to make more explosives with.

With that arsenal, police wondered if Farook and Malik were planning to kill many more and whether the luncheon was their original target. They say what they've found shows there was clear premeditation and planning.