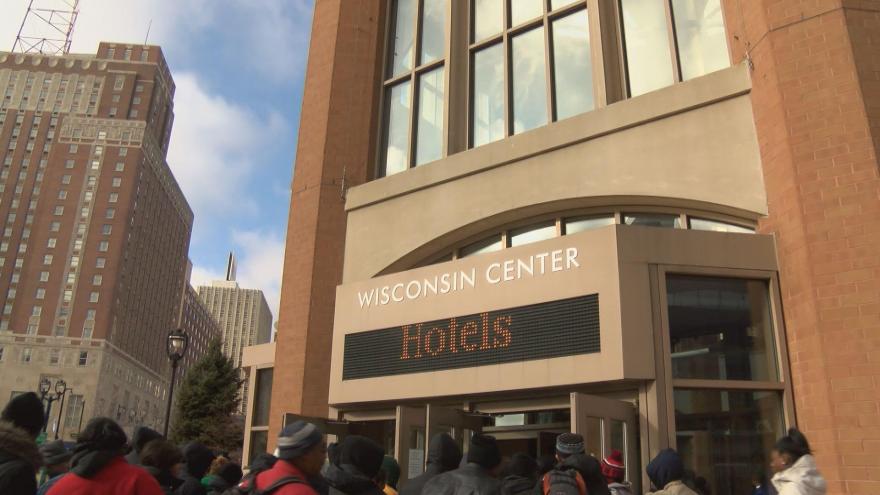 The Salvation Army Family Feast is a Milwaukee tradition on Christmas Day, and thousands of people line up for it.

They started lining up outside the Wisconsin Center starting at 9:30 Thursday morning, and doors didn't open until 11.

“They really out here helping the poor and it's Christmas so everybody is really getting a good meal." said Nathaniel Robinson, a Milwaukee teen.

He was there with his brother Eric and their mother. They stood in line for the meal Christmas morning, but Nathaniel and Eric also wanted to do more. "Everybody need help once in a while with food and stuff like that so it makes me want to give back." said Nathaniel.

There were so many people, all of them with their own story of why they were there. Like James Tyler, a man with nowhere else to go on Christmas.

"I've seen things done here today that I've only dreamed about and it's a good thing. There's going to be a lot of happy people here that didn't come in happy." Tyler said.

“We get people who are unable to afford their own Christmas dinner or don't have a place to eat. Or we get people who are just simply lonely and would like to sit at a table with 10 of their new best friends." said Stan Kelley, Divisional Director of Development with the Salvation Army.

This has been going on for 25 years now, and the Salvation Army says it's the largest single feeding event it puts on in the country.

This is the 13th year governor Scott Walker and his family quietly come in and blend in with the volunteers.

"While gifts are nice, giving to others and sharing it with the community is really important." Walker said.

Before we left the meal, we spotted the Robinson brothers again. Just like they set out to do, they stayed to lend a hand after they finished their own meal.