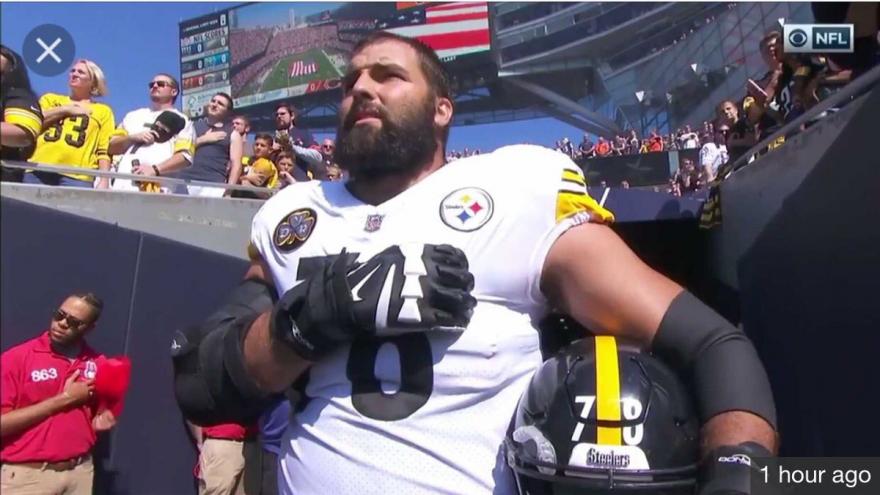 PITTSBURGH (KDKA) – Alejandro Villanueva jersey sales are skyrocketing after he was the lone member of the Pittsburgh Steelers to stand for the national anthem before Sunday’s game against the Chicago Bears.

The rest of the Steelers remained in the locker room and tunnel behind Villanueva during the national anthem.

NFL fans were moved by Villanueva’s decision to emerge from the tunnel and stand for the anthem with his hand over his heart.

Villanueva is an ex-Army Ranger who served three tours in Afghanistan and is a bronze star recipient.

The Steelers elected as a team not to appear on the field for the national anthem before the game.

Head coach Mike Tomlin said he didn’t want the team to be divided.

Defensive end Cameron Heyward discussed the team’s decision in the locker room after the game.

“Everybody’s given their platform. And, you know, there’s a lot of people who look up to us, and we appreciate every single person,” Heyward said. “For one person to call shame on multiple people and say we should lose our jobs because we care, that’s just not right.”

Heyward said he wouldn’t call the controversy a distraction.

“We stand by our choice,” he said. “The main thing we have to gain from this is, it isn’t just one day. We’re out in the community, we’re trying to make changes, not only by one person but as a team.”

Regarding Villanueva’s decision to stand near the tunnel, Heyward said, “Al’s a hell of a man. I appreciate everything he does. Just thinking about, you know, we have multiple people that have family members that serve our country and we never want to take anything away from them. We never want to turn our back on our military. But there was a stand made by multiple people, multiple teams, and you know, we all want to stick together through this.”

Heyward didn’t say if the team would stay in the locker room for subsequent games this season but said the issue won’t only come up on Sundays.

“It doesn’t continue [next] Sunday. It continues on Monday,” Heyward said. “We have to get back in the community. Just making a stand doesn’t do it.”

The decision sparked some divisive reactions among fans, with some fans taking to social media to actually burn their Steelers gear.

“I absolutely loved Tomlin’s stance on it because what he did was say, ‘We’re not involved in this. It’s not political and we want this to be about football,'” Janice Spurlok, of Harrisburg, said.

“I was a little disappointed they stayed in the locker room,” Dan Campbell, of Valencia, said.

“Each individual should be able to speak what they want to speak,” Lloyd Foster, of the North Side, said.

“I feel like it’s their choice as athletes and as citizens,” Niki Campbell, of Valenica, said.

Some Steelers fans felt that the protests were inappropriate.

“I think they should show protesting in different ways,” Tim Zimmerman, of New Castle, said. “I’m from the old school, so I was always that one with my hand across my chest on my heart with the American flag.”