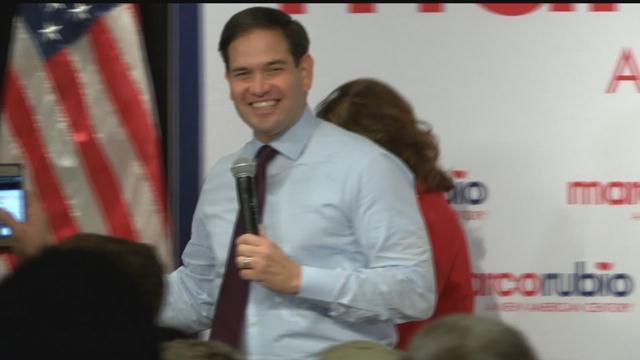 Rubio talked to a room full of supporters.

Rubio said several times he has new and fresh ideas something leadership needs in both the Democratic and Republican parties.

Rubio made it clear he focused on following conservative principles. Rubio said he can deal with a constantly changing global economy.

He also talked about Veterans Affairs and said he will allow veterans to use their benefits at any hospital.

“The benefits are going to follow the veteran, not the veteran going to have to follow those benefits. Which means if the local VA can’t see you for six months, but the hospital around the corner can see you next week, you will be able to take your VA benefits and go to that hospital." said Rubio.

Meanwhile, former Florida Governor Jeb Bush appeared alongside Governor Walker at a Waukesha school. However, he did not endorse the candidate as rumored.

The two discussed education and school choice giving examples of how it has improved the two states.

"In Florida and Wisconsin, because we're opening up the systems for students to be able to rise up, thousands and thousands of kids will have a chance to get a job, or go to college, or live a life of purpose and meaning," Bush said.

Bush did not talk about the debate Tuesday evening.

The candidates will face off with other top polling candidates at the debate, Donald Trump and Ben Carson are leading the polls.