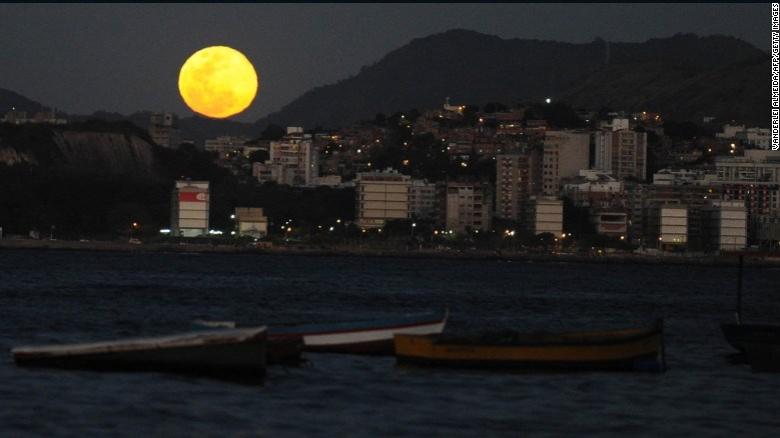 (CNN) If anything unusual happens to you Friday, you'll be right to say it was \"once in a blue moon.\"

The July 31 appearance of the month's second full moon will be the first such occurrence in the Americas since August 2012. Every month has a full moon, but because the lunar cycle and the calendar year aren't perfectly synched, about every three years we wind up with two in the same calendar month.

But Earth's satellite will most likely not appear blue at all.

Typically, when a moon does take on a bluish hue, it is because of smoke or dust particles in the atmosphere, such as during a cataclysmic volcanic eruption.

Celestial events in the sky

One example of this happened in 1883, when the Indonesian volcano Krakatoa erupted, spewing so much ash into the atmosphere that the moon took on a cerulean tinge for years, night after night. After the massive explosion, which scientists believe rivaled a 100-megaton nuclear bomb, the volcanic debris caused vibrant red sunsets and the moon to have a bluish tint.

The dark blue tone of an evening sky can affect the coloring we perceive, as well.

So when the phrase \"once in a blue moon\" was coined, it meant something so rare you'd be lucky (or unlucky) to see in your lifetime, according to NASA's National Space Science Data Center.

The most recent blue moon that was truly blue in hue was in Edinburgh, Scotland, in September 1950. Astronomer Robert Wilson of the Royal Observatory observed the event and concluded that the moon was blue in color because the satellite's light was traveling through a patch of clouds that had particles of smoke and ash from forest fires burning in Alberta, Canada. Those particles crossed the Atlantic Ocean and hovered over Scotland during the lunar event, creating a rare spectacle, according to the National Oceanic and Atmospheric Administration.

Today's modern day usage of the phrase blue moon can be attributed to a Sky and Telescopewriter who in the 1940s tried to clear up a confusing definition published by the Maine Farmers' Almanac. The U.S. Naval Observatory in Washington states that when a season has four full moons, the third one is called a blue moon.

This lunar event will not be seen again until January 2018.