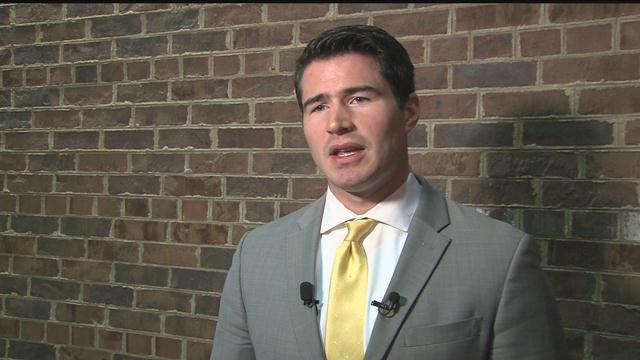 "Life has been amazing," says Wisconsin native and Retired Army Captain Jason Church. "I've had a plethora of opportunity that I never would have had in any other environment."

Not exactly what you might expect to hear from a retired Army Captain who lost both legs to an IED in Afghanistan.

But Wisconsin Native Jason Church is living that reality and sharing his message with students at Eisenhower Middle and High School Friday.

Max Maier, a Junior, was blown away. "It just really opens my mind. I think wow. I take everything for granted. I should be more thankful really."

Captain Church credits his family his faith and doctor at Walter Reed Hospital with giving him the strength to come back and serve in the office of Wisconsin Senator Ron Johnson who was on hand for his recent honors at Armed Forces Week.

"I wouldn't say I've had the usual career path of somebody's who's gotten out of the Army. For me it's working for the senator and continuing my education career."

Now pursuing a law degree at UW Madison, whether its before a hushed group of veterans and their supporters or local school kids, Church  feels compelled to get his message out so other won't let setbacks stop them from pursuing their dreams.

"I hope when they see how I've adapted to my injury, the power of positive message or how lucky we are to be from this country. I hope they get that nugget to get them through that day and keep that."

Kevin Fitzgerald Director of Athletics and Activities says it was an honor to have Captain Church at the school.

"Grit is something we talk about in athletics and sports and I think he's the definition of it," declared Fitzgerald.

The message is all the more powerful when you consider on Monday we will remember our war dead and the man dreams left unfulfilled.

But we also get to witness the duty to public service among those who did return.

"I often say when you're serving your country, you're writing a blank check to the American people," added Captain Church. "Some pay with service, others with limbs. Others sacrifice their lives. It's a blank check and if I was called up again and determined to be fit for duty, I would do it again."