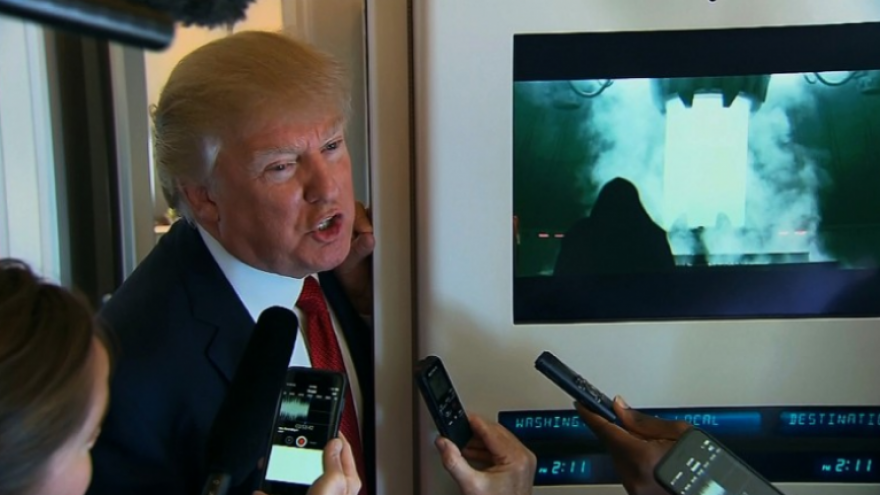 (CNN) The United States launched a military strike on Syrian government targets in retaliation for their chemical weapon attack on civilians earlier in the week, CNN is told.

The strikes are the first direct military action the US has taken against the leadership of Syrian President Bashar al-Assad in the country's six-year civil war and represent a substantial escalation of the US' military campaign in the region, which could be interpreted by the Syrian government as an act of war. The US began launching airstrikes in Syria in September 2014 under President Barack Obama as part of its coalition campaign against ISIS, but has only targeted the terrorist group and not Syrian government forces.

Trump was at his Mar-a-Lago estate in Florida after hosting a dinner for Chinese President Xi Jinping, who arrived the earlier Thursday for his first series of meetings with the US President.

US Defense Secretary James Mattis, Secretary of State Rex Tillerson and Trump's national security adviser Gen. H.R. McMaster were with Trump at Mar-a-Lago at the time. Vice President Mike Pence remained in Washington, where he returned to the White House after dinner.

Trump's order to strike the Syrian government targets came a day after he said the chemical attacks --- whose grisly effects were broadcast worldwide thanks to videos captured in the immediate aftermath -- \"crossed a lot of lines for me\" and said he felt a \"responsibility\" to respond.

\"I will tell you it's already happened that my attitude toward Syria and Assad has changed very much,\" Trump said.

\"When you kill innocent children -- innocent babies -- babies -- little babies with a chemical gas that is so lethal, people were shocked to hear what gas it was, that crosses many, many lines. Beyond a red line, many, many lines,\" Trump said.

Trump at the time said the US should \"stay the hell out of Syria\" and urged Obama on Twitter to \"not attack Syria\" in the wake of the 2013 chemical attack.

\"There is no upside and tremendous downside. Save your 'powder' for another (and more important) day,\" he tweeted in September 2013.

Trump repeatedly criticized Obama during his presidential campaign for not acting on his \"red line\" threat, but the real estate mogul also argued against deepening the US' military involvement in Syria, particularly as it related to Assad.

Trump argued last May in a TV interview that he would \"go after ISIS big league,\" but said he did not support targeting Assad's regime, arguing the US has \"bigger problems than Assad.\"

Syria's six-year civil war has claimed the lives of at least 400,000, according to a United Nations estimate released a year ago. More than 5 million Syrians have fled the country and more than 6 million more have been displaced internally, according to UN agencies.