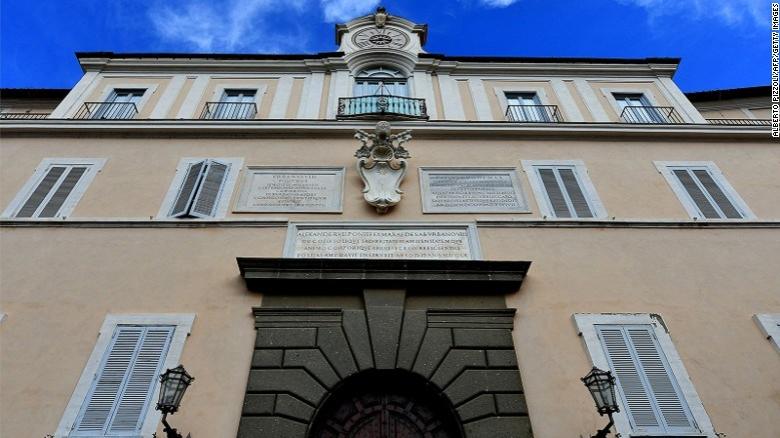 The Apostolic Palace at Castel Gandolfo, for centuries the summer residence and vacation retreat of the leader of the Catholic Church, is located 25 kilometers outside of Rome on Lake Albano.
Twenty never-before-seen rooms opened to the public on October 22, including a private library, study, chapel and simple bedroom.
These rooms have witnessed history: During the Nazi occupation of World War II, Jewish women gave birth to their babies in the bedroom while they were being hidden by Pope Pius XII.
The bedchamber is also where two Popes, Pius XII and Paul VI, died.
Pope Francis has only visited the palace a handful of times since his election in 2013 and has never spent the night there.
While Francis is famous for eschewing luxury and not taking vacations, he's not the first pope to pass up the summer residence.
"Of the 33 pontiffs that could have used the papal residence of Castel Gandolfo, only 15 came, the rest did not," says Dr. Sandro Barbaglio, curator of the historical section of the Vatican Museum.
One pope who made the most of it was John Paul II, who raised eyebrows when he built a swimming pool at the palace and was subsequently photographed in his trunks by paparazzi.
Pope Francis opened the estate's gardens to the public in 2014, and since last year, tourists have also been able to sightsee around the grounds on a white train.
The tour includes a visit to Pope Benedict's organic farm, which is home to cows, free-range hens, cockerels and bees.
The decision to convert the residence to a museum isn't necessarily permanent, according to Barbaglio.
"It is a decision that is permanent until the Pontiff wants it to remain as such. This means a future pope can decide to take back the residence, making it private again."
Tours of the Apostolic Palace can be booked via the Vatican Museums website. Tickets are 10 euros ($10.89) per adult.
Share this article: