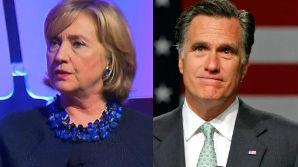 Mitt Romney may say he's not planning to make a third run for the White House, but according to a new CNN/ORC national poll, Republican voters aren't ready to give up on the idea just yet.

While there is no clear frontrunner for the Republican ticket in 2016, most likely GOP voters say they would choose the former Massachusetts governor for the nomination, among 16 potential contenders.

According to the survey, 20 percent of voters say Romney would be their first choice for the nominee, with retired neurosurgeon and conservative activist Ben Carson coming in second with 10 percent of the vote.

In what could be a telling 2016 indicator, when Romney is removed from the competitive set, the first place spot goes to Bush, whose family has publicly pressured him to throw his hat in the ring for months.

But even though Bush leads the pack among the hypothetical field of 15, he only edges Carson in second place by 3 percentage points, and Huckabee in third by just 4 points.

On the Democratic side, Hillary Clinton unsurprisingly receives an overwhelming majority of support, with 65 percent of left-leaning Americans saying she would be their choice for the 2016 nomination. Massachusetts Sen. Elizabeth Warren, a progressive favorite, and Vice President Joe Biden, fall way behind to take second and third place -- with 9 percent and 10 percent, respectively.

But when Clinton is removed from the vote selection, Biden pulls more support among voters, who say they would prefer him as their 2016 Democratic nominee with 41 percent, versus 20 percent for Warren.