Poll: Most disapprove of Obama handling of ISIS 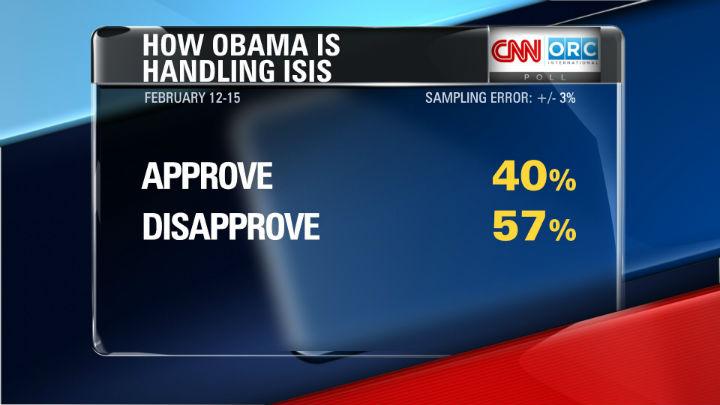 WASHINGTON (CNN) -- Americans are increasingly unhappy with President Barack Obama's handling of ISIS, and a growing share of the nation believes that fight is going badly, according to a new CNN/ORC survey released Monday.

The CNN/ORC poll found 57% of Americans disapprove of how Obama is handling the threat posed by ISIS, a significant decline in support for the President over the past few months. In late September, that number was 49%.

The declining approval ratings for Obama on national security come as a weekend of international turmoil further underscores the growing threats abroad.

Denmark's capital was rocked by two shootings, one at a free speech event featuring a controversial cartoonist and another just hours later outside a synagogue. The attacks left two dead and five police officers wounded.

And Egypt launched a second round of airstrikes against Islamic State strongholds in Libya on Monday, in retaliation for a video released Sunday that appeared to show ISIS militants beheading a group of 21 Egyptian Christians.

Obama issued a statement condemning the killing of the Christians on Sunday night, though Obama's Republican opponents have consistently made the case that the growing Islamic State threat is exacerbated by what they see as his weak leadership.

In the poll, Americans increasingly believe the U.S. military action against ISIS is going badly, with 58% saying so in the latest survey, up from 49% who said the fight wasn't going well in October.

Even among Democrats, nearly half --- 46% --- say things aren't going well in the battle against ISIS.

And about half of respondents, 51%, say they trust the President as Commander-in-Chief of the military.

But with ISIS affiliates continuing to commit brutal, gruesome murders and multiple terrorist attacks abroad grabbing international headlines over the past few months, support for sending ground troops to Iraq and Syria to confront the threat appears to be growing.

The survey suggests Americans are warming up to the idea of sending ground troops to combat the terrorist organization.

Still, the parties have become more polarized on the prospect since November, with 61% of Democrats opposed and a similar majority of Republicans supportive of the prospect, an eight-point increase. Independents, meanwhile, are split, with 48% in favor and 50% opposed.

The prospect of sending in ground troops remains a sticking point for both congressional Democrats and Republicans in the debate over Obama's Authorization for the Use of Military Force, which would give him legal authority to combat ISIS.

But the AUMF, and Obama's decision to go to Congress for the official authority to continue battling ISIS, is widely popular, according to the new poll.

Seventy-eight percent of Americans say Congress should give Obama the authority to fight ISIS, a slight decline from 82% who supported it in December. A similarly large majority say Obama was right to ask Congress for the authority, rather than proceeding with the battle unilaterally.