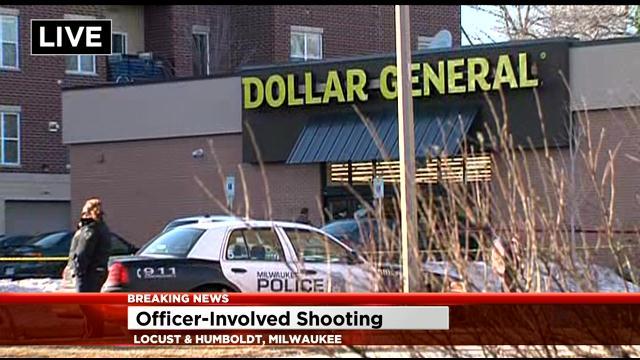 Officers responded to a robbery call at a Dollar General Store Monday afternoon at Locust and Humboldt in Milwaukee's Riverwest neighborhood.

Two officers who were first on scene saw one armed masked man in the midst of robbing the store according to Police Chief Ed Flynn.

The chief says one officer engaged in gunfire with the suspect after that suspected ignored his commands to put down the gun.

\"He refused commands to drop his weapon and apparently turned towards the officer,\" Chief Flynn told reporters on the scene. \"One of our officers, a 7 year veteran, age 38, fired one shot, striking the suspect.\"

There is no word on the suspect's specific injuries.

\"He is apparently in very serious condition,\" said Chief Flynn.

The preliminary information indicates that two shots total were fired.

The state Department of Justice will be investigating given a relatively new state law that requires outside analysis with officer involved shootings.

In fact the Chief says they immediately sealed off the scene and DOJ investigators were quickly on site organizing the probe.

The officer who fired his gun is on administrative duty per department protocol with officer involved shootings.

Chief Flynn would not say which bullet went where, citing those details are part of the investigation.

There were a half dozen witnesses in the store, but no other injuries. Chief Flynn said it would be the DOJ that interviews them. Several officers apparently also witnessed the events and will be interviewed as well.

There's no indication that the suspect acted with anyone else. Police were not seeking any additional suspects.