Poignant moments unfold at a preschool in a retirement home 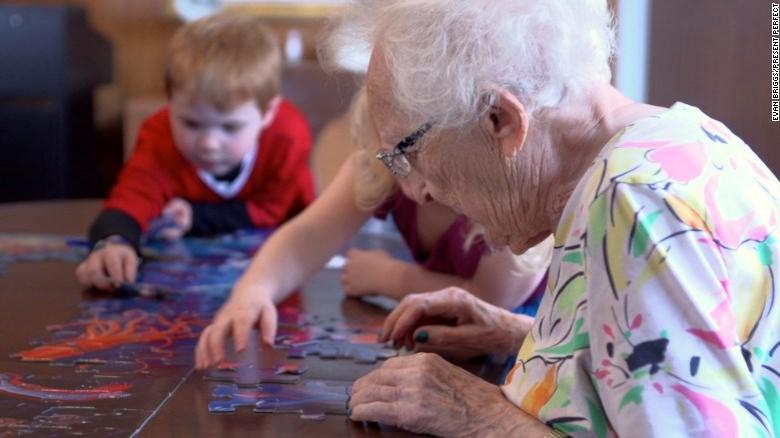 (CNN) -- Filmmaker Evan Briggs had spent a long time thinking about aging in America, our relationship to the elderly and how dysfunctional it seemed.

\"What is it about our value system that makes it so these people don't really have a place here anymore after a certain age? Why are we OK with that?\" she thought. \"There is so much wisdom and life experience that our elderly members of society have that we're just not availing ourselves of, and that just seems like a huge loss.\"

When she learned there was a preschool in her town set inside a retirement home, where the residents and the children interacted on a daily basis, she knew she wanted to film a documentary there.

Briggs spent the 2012-13 school year filming three days a week at the Intergenerational Learning Center for children 6 weeks to 5 years old inside Providence Mount St. Vincent, a retirement home for about 400 adults in West Seattle. Her first feature-length film, \"Present Perfect,\" explores \"the very real experience of aging in America -- both growing up and growing old.\"

The five-minute trailer, which was released in early June as part of a crowdfunding campaign, is filled with loving and life-affirming interactions between the little ones and the elderly residents. A little boy named Max patiently repeats his name as a hard-of-hearing resident keeps getting it wrong. A resident reaches down and strokes a toddler's hair.

Intergenerational programs exist at approximately 500 long-term care facilities, senior centers and other facilities across the country, according to the Generations United website. Briggs hopes the film will spark more discussions about replicating the model.

\"It was clear to the leadership, at the time, that creating the feeling of 'a village' was going to require the addition of children along with a robust plan to bring the two age groups together,\" Hoover said.

Briggs released the trailer as part of a Kickstarter campaign to raise funds for post-production, and the response has been so powerful that the film surpassed its $50,000 goal in the first two weeks. This week, Briggs set a new stretch goal of $100,000, which she says would allow her to finish the film without seeking additional funding sources.

\"It's so exciting to me that the idea is resonating. It's just the most amazing surprise,\" she said. She imagined people are responding to the film's implicit message of hope. \"Look at this simple thing that's being done, and there's no reason this can't be replicated everywhere.\"

Since the trailer was released, the Seattle school has had a huge response from local families looking to enroll in the program, and inquiries from people around the world who would like to know how to create the intergenerational model in their own community.

The film's title, \"Present Perfect,\" refers to the space where the children and the elderly overlap: They both live only in the present.

\"They've arrived at that place from either having an abundance of life experience or no life experience,\" Briggs said. \"It's so amazing and beautiful. That's something I was hoping to capture.\"

As the school notes, intergenerational programs benefit both the children and the elderly. The elderly get a renewed sense of self-worth and the joy and laughter that toddlers bring to any setting.

The children become more accepting of people with disabilities, learn about the aging process and get unconditional love from the doting residents. They also learn that sometimes, adults need help too, as in the moment when a woman in a wheelchair is trying to help a little boy unzip his coat. She eventually gives up and says good-naturedly, \"I can't even do it.\"

Another poignant moment captured in the trailer shows the toddlers and adults working side by side to get sandwiches into plastic bags for the homeless.

\"It's something that you or I could do in 30 seconds flat, and watching them both try to fumble through with limited dexterity was kind of painful but sweet because they really needed each other to make it happen,\" Briggs said. \"You could tell the kids felt, we're doing this together, and we're helping each other, and it's not yet another situation where I'm not big enough.\"

In the footage, Briggs found plenty of awkward or difficult interactions between the adults and the kids, and she said she wants viewers to see those moments, too. There was also death: Two of the residents she was following closely died during the course of filming. One resident was wheeled right past a classroom.

\"I'm not trying to paint this rosy, utopian picture,\" she said. \"It is wonderful, but it's real at the same time, and we all need to understand what that looks like and really face it head-on.\"