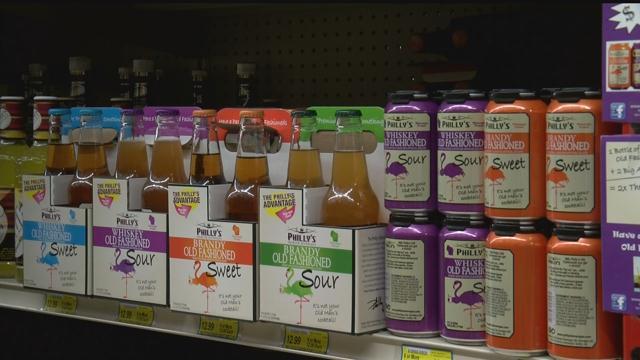 Phil Orlenko is a local kid who made good.

He rose of the ranks to become a vice president of sales for two electronics companies.

But when the businesses changed hands Orlenko found himself out of work at 53.

So, he found a second round in career and life the old fashioned way.

"I was basically unemployed. Sitting on the river," recalled Orlenko. "On a pic-nic table with my best friend and we were drinking old fashioneds. And he basically says you should get off your blank and do something. Why don't you bottle old fashioneds?"

That was two years ago and Philly's Premium Beverages is still going with a  recipe Phil's dad taught him.

He recalls those days in Sheboygan.

"My father taught me when I was 14. So he could go party. I was designated the bartender."

It helped put Phil through college and has now created inspiration for his company.

These are not flavored beers.

They are old fashioneds with real whiskey or brandy. Something he had to fight the government to do.

"We were rejected by federal government because they said old fashioneds are only made with whiskey not brandy. That's where the beverage attorneys came in. We got  at least 20, 25  articles showing in Wisconsin, that's how we make old fashioneds.

Orlenko cashed in his 401 K to start the company. He went to family and friends for investments. He managed to find a local bank and distributor that would back him but he still had to make the decision to sell his house to keep things going.

It was a risk he thought of in advance, and a sacrifice he was prepared to make.

He believes that much in his product.

"That's the whole process of this. You know you have to believe in your own product. Just starting a business to start a business unless your passionate about it  You're really not going to succeed."

The BBB of Wisconsin has an entire section of its website dedicated to help would be business owners network with the right experts beforehand, from finance, to contracts, to insurance.

"You could launch from your home, your garage," explains Jim Temmer of the BBB WI. "You don't have to have a brick and mortar office these days.  A lot of things are done over the internet. But you still have to plan. Do your research and don't make any decision based off emotion."

Orlenko admits there are some expenditures he wishes he could take back, but he's learned from his mistakes.

Answering to market demand to put his cocktail in a can, he's managed to secure major contracts with larger, high traffic venues from the Wisconsin State Fair to the BMO Harris Bradley Center.

"The local vendors took us on. This year they're buying more in more locations. Because when people tried it,they bought it.  We live on to fight another day."

Several financial advisers cringe at the notion of cashing in your 401K. They warn people to not cash in their 401k without consulting a registered financial advisor (with a fiduciary) first. That's because of the financial penalties and high income taxes that might be involved.

The BBB says there are three keys to a successful start up business.

1. Establish a brand with a unique position compared with the competition.

2. Use affiliations like the BBB to market and advertise and get the word out.

3. You've got to do social media and a website.