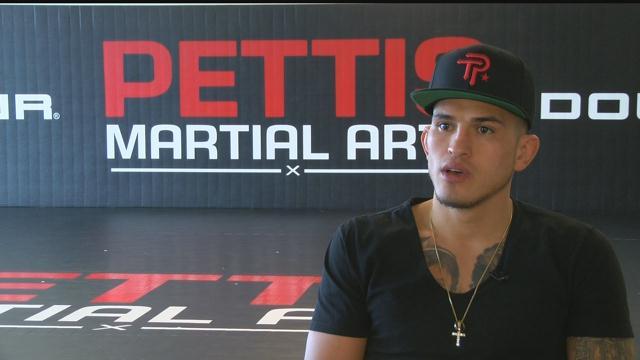 UFC fighter, Anthony Pettis has been having a rough couple of months. Not because of his career, but because of crimes happening outside his Milwaukee home.

At the moment, Pettis is training for the main event at UFC 206, the winner of which will get a featherweight title shot next year.

While the champion has had several problems at his home he says he hasn’t let them interfere with his training.

“From what happened in Milwaukee to my house, to becoming a title shot, it’s been a rollercoaster of a training camp for me,” says Pettis.

A series of events have unfolded around the 29-year-old in the middle of his training camp, one while he was even at home.

“I was up in Thailand training for a couple of weeks and I had just gotten back and the car was on fire,” says Pettis. “We didn’t know what the attack was for, if it was an attack, or if it was an accident.”

Pettis says the incident is still under investigation.

“So we kind of pushed back from that, focused back on the fight. And all of a sudden these kids come back and they steal from my car,” explains Pettis.

However, this time he had caught them on camera through his home security system.

“I had my nutritionist living with for 7 weeks. Unfortunately, he saw what happened at my house. I brought in a Brazilian Jitsu coach. I’ve built a great team and we didn’t let it stop us. We’re going forward and accomplishing our goals,” says Pettis.

The Milwaukee native says the incidents have been rough but they have not stopped him from appreciating his community and representing it the best way he know how.

“It hurts me on that sense that I had to protect myself from my own city. But I feel like we’ve pushed forward. I have some great guys on my corner that just mentally got me past it,” says Pettis.

Pettis says he’s proud to call the Brew City home and has no intentions of moving.

His upcoming fight is scheduled for December 10.