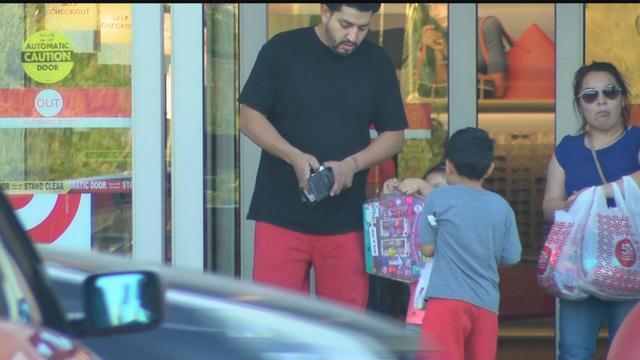 Cars come and go from Target Wednesday night as parents and their kids check last-minute supplies off that back-to-school list.

"It's not a mad house like black Friday," said parent Clifton Phelps.

Phelps has four students to send off Thursday morning.

"We're ready because it's the day before school," he said. "But there's always gonna be something, once you get the school list back from the teacher that you gotta go back and get."

According to a national survey, nearly 30 percent of parents polled said back-to-school shopping puts a strain on family finances. Shopping and retail experts said family budgets are increasing, partly because of the cost of electronics.

"It's anxious as a parent," Phelps said. "You gotta pay for supplies, uniforms, clothes going back to school."

"We know where we're supposed to be going and know which kid needs what and we're just gonna grab it and go," said parent Pamela Boyd.

Having a list and cashing in on sales are some ways to save money. But, the anticipation of going back to school is just as exciting for kids as it is for parents.

"Tired of spending money entertaining them," said Boyd. "They want to go places all the time."
"And it's cheaper on groceries," said Phelps.

Getting kids back-to-school is expected to take a bite out of parents wallets.

The National Retail Federation predicts Americans will spend more than $27 billion shopping for school, either in-stores or online.